Muslims call for Chapel Hill murders to be branded terrorism 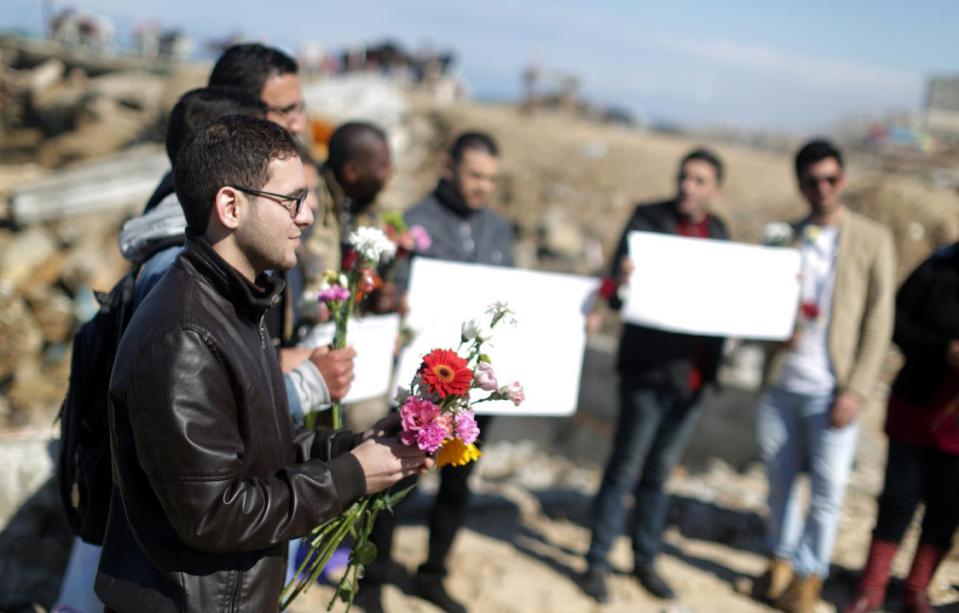 Palestinians carrying flowers gather at the sea of Gaza City, on February 14, 2015, in remembrance of the three victims of the Chapel Hill shooting in the US (AFP Photo/Mahmud Hams)
Share:

As US authorities investigate the cause of the murder of three young Muslims in North Carolina this week, Muslims around the world push for the tragedy to be treated as a hate crime – perhaps even an act of terrorism.

US officials say the motivation for the shootings Tuesday of three young Muslim-Americans by a self-avowed atheist in North Carolina remains unclear. But growing numbers of Muslims around the world are weighing in with suspicions that the murders were an American hate crime and, perhaps, as the Palestinian foreign ministry suggested on Saturday, even an act of terrorism.

The Palestinian foreign ministry called the murder “terrorism, which targets civilians based on their religion,” according to Wafa.

Demonstrations have been held throughout the Palestinian territories, especially the Gaza Strip, where further rallies are planned for next week.

More deeply, the shootings came amid a backdrop of political tension in the US, highlighted last month at Duke University in Durham, N.C., just a few miles from where the shootings took place, when university officials, amid complaints and threats, cancelled a plan to amplify the Friday Islamic call to prayer through the university’s iconic clock tower.

To be sure, Europe has had even deeper struggles with Muslims as some countries have banned the kind of head gear, the hijab that the two women killed Tuesday were wearing.

But the Pew Research Center has found that US attitudes, too, have chilled toward Muslims in general, largely because of growing terror threats overseas, Pentagon reports of radicalized American Muslims flooding to Syria, simplistic media portrayals of Muslims, and simmering concerns by a sliver of Americans about a conspiracy to establish Sharia law in US courts.

Late Friday, President Obama made his first statement about the murders, after Turkish Prime Minster Recep Tayyip Erdogan, who has previously warned of growing Islamophobia in the West, called US leaders out for their “silence” over the killings.

“No one in the United States of America should ever be targeted because of who they are, what they look like, or how they worship,” Obama said in a written statement.

The victims were buried Thursday. The accused shooter, Craig Stephen Hicks, a 40-something concealed weapons carrier and self-appointed condo complex watchman, turned himself in, and is facing three first degree murder charges, crimes heinous enough to be punishable by death in North Carolina. The Federal Bureau of Investigation has opened a probe into the shootings as well, to determine whether the murders were inspired by religious bias, which could add hate crime penalties.

Through the hashtag #muslimlivesmatter, condolences and suspicions have flown across the globe via social media. On Saturday, the Palestine Foreign Ministry weighed in, urging US authorities to investigate the shootings as a hate crime.

According to the state-run Palestinian News and Information Agency, the ministry called Mr. Hicks “an American extremist and hateful racist,” and added that the shootings amount to “a serious indication of the growth of racism and religious extremism, which is a direct threat to the lives of hundreds of thousands of American citizens who follow the Islamic faith.”

Accusations of terrorism against Muslims in America and further demands for Palestinian investigators to join the Chapel Hill Police Department in their probe may seem ironic to some since the Palestinian Authority counts Hamas, a US State Department-labeled terrorist organization, as a “governing partner.”

Moreover, while hate crimes against Muslims increased by 50 percent in 2011, the vast majority of proven hate crimes in the US every year are committed against blacks, gays, and Jews, according to the FBI.

But the undercurrent of the Palestinian response – that Americans should be careful not to use a double standard when dealing with crimes against Muslims – seemed to be reflected more broadly.

“If it, for example, was a Muslim man who executed three Christians, white American students who were young and beautiful and had just gotten married – what would the reaction be?” Steve Sosebee, who heads the Palestine Children’s Relief Fund, told USA Today.

The shootings have also brought to the fore representations of Muslims in American media and films. Some have suggested Clint Eastwood’s “American Sniper,” about the life and death of the American Navy SEAL sniper Chris Kyle, inspired anti-Muslim sentiments online. And there are reports of a spike in sympathy for Mr. Hicks and his act on US social media sites.

“No one could reasonably suggest that western news and entertainment media organizations should ignore negative portrayals of Muslims altogether,” writes Mohamad Elmasry, an assistant professor in the Department of Communications at the University of North Alabama, on AlJazeera.com. “It is not unreasonable, however, to ask for contextualized accounts, fairer portrayals, critical examinations of the root causes of terrorism, an increase in Muslim voices, and news coverage that does more to separate ordinary Muslims from groups like al-Qaeda and ISIL.”

Chapel Hill authorities have not yet determined whether a hate crime took place, but there’s evidence, according to the New York Times, that Mr. Hicks, a self-avowed atheist who has criticized a variety of religions, displayed “equal opportunity anger” against other residents, often in disputes over parking and noise. Police have said Hicks had had an ongoing spat with the three victims over their use of visitor parking spaces.

But whether the Muslim garb worn by the female victims played a role in moving Hicks from menace to murder may be difficult to ferret out. Nevertheless, there’s growing international suspicion that creeping Islamophobia in the US may have somehow fueled the murders on Summerwalk Circle, the Chapel Hill street where Hicks roamed, the Times said, as a “self-appointed watchman.”

The bottom line among many Muslims in the US and abroad is that “the tragedy should mark a turning point in the uneasy national conversation about Islam,” writes Aamer Madhani, in USA Today.