Assad as barbaric as ISIS according to Syrian opposition 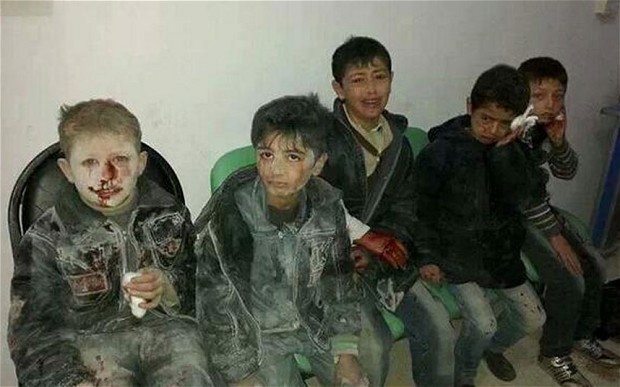 Children purportedly wounded by a ‘barrel bomb’ by Syrian regime forces
Share:
While worldwide outrage over ISIS has hit a new peak, Syrian opposition forces are desperate for international intervention to stop Bashar Al-Assad from slaughtering masses by barrel bombs and chemical weapons. A Syrian opposition leader called Thursday on world leaders to take “immediate action” to end government attacks on rebel-held suburbs of Damascus, amid reports that some 150 people have been killed in government airstrikes in the past 10 days.

Khaled Khoja, leader of the Syrian National Coalition, made the appeal at a press conference held from the group’s base in Turkey.

“The Assad regime’s killing of children and the elderly with rockets, barrel bombs, and toxic gases is as a crime as horrible as ISIS’s slaughtering and burning of people alive,” Khoja said, using an acronym for the Islamic State extremist group.

He said Assad’s “barbaric assault” on Douma constitutes a war crime and urged the U.N. to force the Syrian leader to stop indiscriminate bombardment of rebel-held territory. 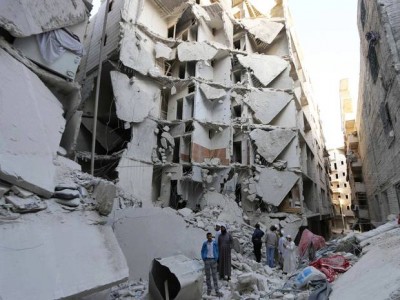 The government has been pounding the eastern suburbs of Damascus known as Ghouta for days as part of a military campaign against rebel-held districts east and south of the capital Damascus. Douma, a sprawling town east of Damascus, has taken the brunt of the airstrikes.

Government batteries have rained shells and rockets on Douma and other rebel-held districts outside the city in attacks that activists say have been some of the worst they’ve seen, including dozens of barrel-sized bombs that are dumped from helicopters.

The Britain-based Syrian Observatory for Human Rights said it has documented at least 146 people including 29 children who were killed in government airstrikes in Ghouta since the beginning of the month.

Meanwhile, rapid advances by government forces backed by Lebanese Hezbollah fighters south of Damascus slowed Thursday because of a snowstorm hitting the region.

Ahmad al-Masalmeh, an opposition activist in the southern city of Daraa, said snow fell in some areas south of Damascus, making it difficult for vehicles to move. He also said there was no government air force activity.

Syrian troops and Hezbollah fighters on Wednesday seized strategic hills and villages from rebels and a local al-Qaida affiliate near the Israeli-occupied Golan Heights in a surprise counteroffensive that alarmed Israeli officials.