MP backtracks on targeting Christian symbolism after outrage in Lebanon 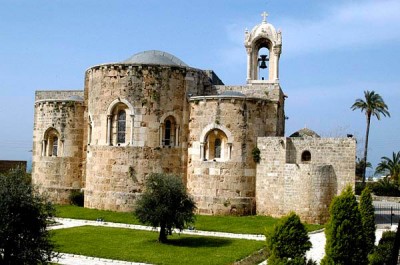 Lebanese MP Khaled Daher has apologized after being criticized by allies and opponents for saying Christian religious symbols should be removed from outside churches. He said his comments were abridged and taken out of context.

A recent agreement between the Future Movement and Hezbollah has seen the removal of political banners from Sidon to Tripoli.

However, controversy began among certain factions in the northern city of Tripoli when black flags containing the word “there is no God but God” in Arabic were removed from Abdel Hamid Karami Square.

“The Ministry of Interior needs to be clear on what is required” for removal, said Dr Imad Salamey, a political science professor at the Lebanese American University.

The ministry needs to be “clear whether political symbols and leaflets include religious symbols.”

Salamey said most Lebanese political parties use religious symbols, which adds to the confusion over where to draw the line.

Daher, a conservative Sunni Muslim, condemned the removal of the black flags. “We’ll never tolerate this clear and flagrant insult against the Sunni community,” he told a crowd at Abdel Hamid Karami Square.

“If they want to remove [religious banners], let them start with the Christ the King statue and posters of [Christian] saints,” he said.

Daher was last year accused of having had regular contact with Ahmad Mikati, an operative of the Islamic State of Iraq and Syria who was busted by Lebanese security forces.

Daher’s comments caused outrage in Lebanon, including from members of the Future Movement, to which he is aligned. There have been calls from Lebanese on social media for his removal from parliament.

Sheikh Malek al-Shaar, the mufti of Tripoli and northern Lebanon, said the black flags were being removed because of their association with ISIS.

Dr Sami Nader, director of the Levant Institute for Strategic Affairs, said Daher’s analogy was “rushed and not well thought out.”

Nader added that “the analogy wasn’t appropriate because Christ the King is a shrine and a landmark, as is Al-Amin mosque or any other mosque. They aren’t slogans. They’re part of our very identity and culture.”

Salamey said the Ministry of Interior should consider banning all religious symbols from public spaces, though he acknowledged that this was unlikely to happen.