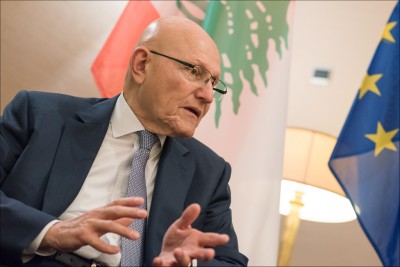 Prime Minister Tammam Salam stressed on Wednesday that Lebanon is passing through a political crisis, pointing out that the nation will not heal without its head.

“We are still amid a political crisis and the nation will not completely heal without its head,” Salam said during a conference on the Rural Tourism Strategy for Lebanon at the Grand Serail.

“We will not have tourism without security and stability,” the PM said, pointing out that a security plan has been established 10 months ago and is still being implemented across the country.

He considered that the rural areas represent Lebanon’s history.

Minister of Tourism Michel Pharaon remarked that the sector’s growth reached 25 percent, with the rural tourism alone growing from five to ten percent.

“We had to compensate for the paralysis crawling in our institutions and develop projects that could be followed up by active committees,” Pharaon said, expressing hope that the successor government and new president would continue the exerted efforts.

The minister expressed full support to the army “which is defending our values.”

For his part, Environment Minister Mohammed al-Mashnouq remarked that his ministry and the ministry of tourism complement each other.

“The information ministry and all its units are fully ready to market rural tourism,” Information Minister Ramzi Greij stressed.

The Rural Tourism Strategy for Lebanon, which was drafted by a non-profit organization Beyond Beirut, aims at improving rural tourism in various areas and creating new ones that will boost the state’s treasury and employment opportunities.

The plan targets both locals and foreigners.