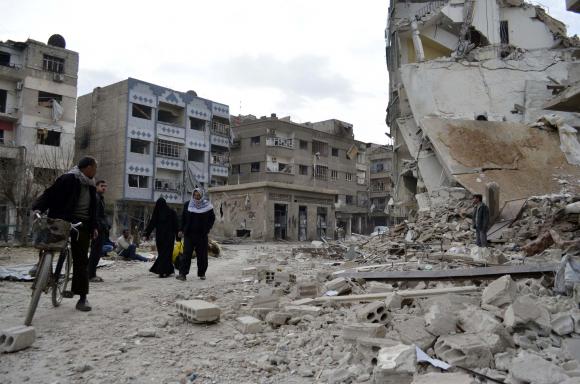 Residents walk past damaged buildings after what activists said were air strikes by forces loyal to Syria’s President Bashar al-Assad in the Douma neighborhood of Damascus February 6, 2015. REUTERS/Amer Almohibany
Share:
The death toll after nearly four years of civil war in Syria has risen to 210,060, nearly half of them civilians, but the real figure is probably much higher, the Syrian Observatory for Human Rights said on Saturday.

The Observatory, which is based in Britain and has a network of activists across Syria, said that 10,664 children and 6,783 women were among the dead.

The rights group said it had counted 35,827 Syrian rebels and 45,385 Syrian army soldiers killed. The Observatory’s toll could not be independently verified by Reuters.

But the total death toll was likely to be much higher, perhaps by more than 85,000, said the group’s chief, Rami Abdul Rahman. Groups on both sides try to hide their casualties, he said, making the fighter death toll very difficult to gauge.

Over 3,000 fighters belonging to Shi’ite militias and groups in Iraq and Iran, including 640 from Lebanon’s Hezbollah, died fighting alongside the Syrian army, the group said.

Abdul Rahman said all the cases included in its 210,000 death count were those it could verify with either name and identification documents, or pictures or videos.

Syria had a population of some 23 million before the outbreak of the war. Beside the dead and injured, the United Nations says some 3.73 million Syrians have fled the country and officially registered as refugees abroad.

The rights group also said the war had left 1.5 million Syrians with some type of injury and permanent disability.