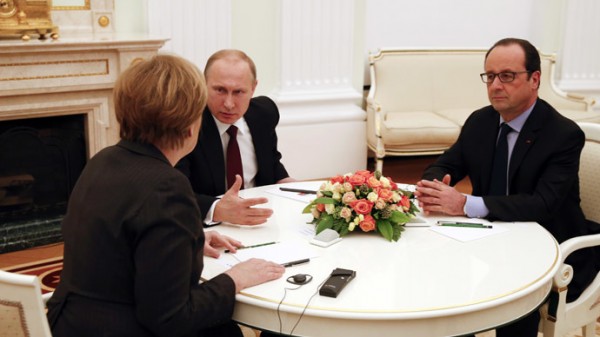 Russian President Vladimir Putin struck a defiant tone a day after talks in Moscow with the leaders of Germany and France failed to achieve a breakthrough in resolving the Ukraine crisis.

Russia won’t tolerate the post-Cold War global system dominated by a single leader, Putin said Saturday at a meeting with the Federation of Independent Trade Unions in Sochi.

“That type of world order has never been acceptable for Russia,” Putin said. “Maybe someone likes it and wants to live under a pseudo-occupation, but we won’t put up with it.”

German Chancellor Angela Merkel and French President Francois Hollande met the Russian leader for more than five hours Friday to discuss spiraling violence in eastern Ukraine between government forces and Russian-backed separatists. A breakdown of the diplomacy may strain trans-Atlantic unity in dealing with Russia, as Europe’s consensus on economic sanctions shows signs of fraying.

Ukraine, the U.S., the European Union and NATO say Russia is supporting the separatists with hardware, cash and troops, accusations the Kremlin denies. Russia says Ukraine is waging war on its own citizens and discriminates against Russian speakers, a majority in Donetsk and Luhansk.

Heavy fighting has forced more than 1.5 million people to flee their homes, with some 600,000 Ukrainians seeking refuge abroad since last February, the United Nations’ refugee agency said in a report. The conflict has killed more than 5,350 people since April, according to the UN.

Some U.S. officials and diplomats in Washington are openly discussing supplying weapons to the Ukrainian army, a position that has been rejected by Germany and is viewed skeptically by President Barack Obama. Senator Lindsey Graham, a South Carolina Republican, said in an interview in Munich that the U.S. could provide defensive weapons to Ukraine.

NATO is setting up military headquarters and command centers from the Baltic to the Black seas along Russia’s borders and plans to ultimately field a rapid-reaction force of 30,000 troops as relations with the Kremlin have deteriorated.

Merkel, Hollande, Putin and Ukrainian President Petro Poroshenko plan a conference call Sunday to discuss a potential settlement. Amid the cease-fire bid, Ukraine said rebel forces are readying a new offensive to extend their territorial gains in the east.