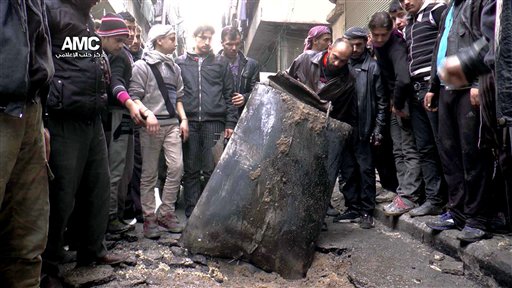 By Lara Setrakian and Katarina Montgomery

With global attention focused on the fight against jihadi groups like the Islamic State (ISIS), the Syrian regime has continued its use of barrel bomb attacks on civilians.

In an address to the U.N. Security Council last week, Kyung-wha Kang, the United Nations deputy emergency relief coordinator, once again accused the Syrian regime of “using explosive barrel bombings against civilians in Syria.” It came in spite of a resolution calling for an end to the indiscriminate employment of weapons.

“Barrel bombs, crudely made drums of explosives dropped from helicopters, are so imprecise that the Syrian air force doesn’t dare drop them near the front line for fear of hitting its own troops,” Ken Roth, executive director of Human Rights Watch, told Syria Deeply.

“If we could stop the barrel bomb, it’s hard to think of anything else that would make a greater difference in stopping the slaughter of civilians and destruction of civilian institutions in civilian areas,” he added.

Roth spoke to Syria Deeply about the devastating effect barrel bombs are having on the civilian population in Syria.

Syria Deeply: You’ve tracked the use of barrel bombs, and prior to that the use of missiles on civilian areas. What’s the state of play now?

Roth: The barrel bombs are continuing and indeed they are the principal reason why civilians are dying in Syria today. Everybody is focused on ISIS. ISIS is terrible, civilians are suffering under ISIS, but if you stand back and say, what is the principal tool being used to slaughter civilians? It’s the barrel bomb. Initially, governments don’t really want to talk about this, because they are so focused on ISIS and don’t want to do anything that would undermine the Assad government’s ability to hang on and theoretically fight back against ISIS. People don’t seem to recognize that the barrel bomb is not a military weapon. It is so imprecise that the Syrian air force doesn’t dare drop it near the front line for fear of hitting its own troops.

Barrel bombs, for those who don’t know, are typically an oil drum or some large canister filled with explosives and metal fragments that serve as shrapnel. It is dumped from a helicopter hovering at a very high altitude to avoid anti-aircraft fire. From that altitude, it can’t be aimed with any precision whatsoever – it can simply be dumped into a neighborhood, and it is neighborhoods that barrel bombs are dumped on because of the need to stay away from the front line. If you ask what is enabling the pro-regime forces to hold on, it’s now the barrel bomb.

It is a terror and an anti-civilian tool. Part of Assad’s strategy is to make life as miserable as possible for the civilians living in opposition-held areas. It’s designed to kill many and terrify the rest so they will flee and gradually depopulate the area, to make it harder for the rebels to hang on.

Syria Deeply: What’s the size and scope of the problem?

Roth: If you talk to Syrians, the things that they fear the most are the barrel bombs. You hear stories of people who move their families closer to the front line (meaning they are braving snipers and artillery) because they feel safer there, where the barrel bombs won’t be dropped. Barrel bombs are hitting hospitals, schools and various civilian institutions in opposition-held areas of Aleppo and other areas. If we could stop the barrel bomb, it’s hard to think of anything else that would make a greater difference in stopping the slaughter of civilians and destruction of civilian institutions in civilian areas.

Syria Deeply: What’s the advantage to the regime of using these particular forms of weaponry in this particular conflict?

Roth: This goes back to the beginning. Assad from the start chose not to fight this war under the Geneva Convention, which in essence dictates that you only shoot at the other side’s combatants, and you do everything you can to minimize harm to civilians. He threw those rules out the window. He has been fighting a war strategy of war crimes aimed in large part at the civilian population. The barrel bombs, used for a good year now or longer, are just the latest, cruelest, largest manifestation of this strategy.

Syria Deeply: What’s your hope for the pressure that can be applied to induce behavior change in the regime when it comes to the use of barrel bombs?

Roth: What I’ve found in discussions with Western governments, Russian officials and even Iranian officials … for various reasons they don’t want to restrict the military weapons available to the Syrian government. The major Western governments are focused at this stage on fighting ISIS, and Russia and Iran are focused on bolstering Assad. None of them have an immediate interest in stopping the barrel bombs. I’ve had to explain the lack of military relevance of this weapon. When they hear that, then they are willing to step back. I’ve received some positive response from both Moscow and Tehran on this point.

In terms of Western governments, they are afraid of the barrel bomb issue for a separate issue – they don’t want to take on the broader issue of the Syrian government’s use of conventional weapons to attack civilians. Having come close to the brink of military involvement via the chemical weapons issue, and having been focused on other issues with Russia and Iran, the West simply hasn’t wanted to bring this up. There is no avoiding the fact that Ukraine is the top issue in Moscow, and potential nuclear weapons is the top issue in Tehran, but there should be bandwidth to take on the barrel bomb issue as well. Especially since Russia and Iran shouldn’t have any interest in the barrel bomb attacks continuing – they aren’t necessary to the Assad regime’s survival.

I’m guardedly optimistic that if we can highlight the devestation being caused by the barrel bombs and the lack of military utility, we can make a difference. One factor with the West is that so far they are pursuing only a military strategy against ISIS. To some extent they are trying to stop the flow of arms, weapons and personnel to ISIS, but they aren’t really taking on the ideological appeal of ISIS – part of it is religious and the idea of a caliphate, but a big part of it is that ISIS can represent itself as the only force that is effectively trying to stop the Assad regime’s slaughter of civilians. The West shouldn’t be giving that argument to ISIS. There have to be ways to address the barrel bombs – Assad’s primary tool for killing civilians. It’s the right thing to do in humanitarian terms, but it is also important to help undercut ISIS’s ideological appeal.

Syria Deeply: The U.N. has called for an end of the use of barrel bombs. What would it take to create actual accountability and enforce change?

Roth: The U.N. Security Council has talked about barrel bombs in generic terms. It hasn’t made any efforts to follow up on that broad language with concrete pressure on Damascus to stop. We need to go beyond ritualistic condemnation and upholding of the Geneva Conventions, and focus on pressure on Damascus to stop. We’ve seen that when serious pressure is applied, they do stop. It’s time for that pressure to be applied to stop the barrel bombs.