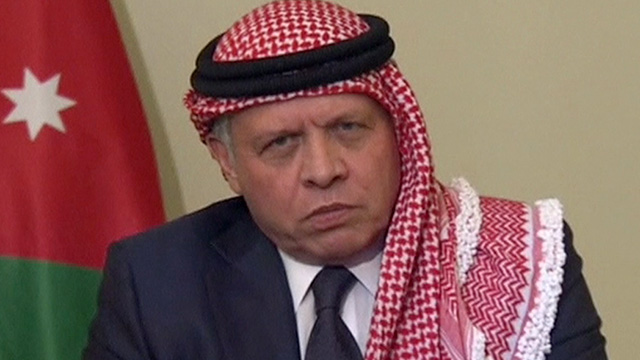 Jordan’s King Abdullah II has promised to fight back hard against Islamic State, saying that the death of a Jordanian pilot at the militants’ hands will not be in vain.

The remarks were made as the king held a crisis meeting with security chiefs.

He cut short a US trip after IS posted a video appearing to show pilot Moaz al-Kasasbeh being burned alive.

Lt Kasasbeh was seized after crashing during a bombing mission by the US-led coalition over Syria in December.

Jordan had sought to secure Lt Kasasbeh’s release in a swap involving Rishawi, but IS is believed to have killed him a month ago.

The BBC’s Paul Adams in Amman says talk of an exchange appears to have been an IS tactic to string Jordan along and foster doubt among Jordanians over its role in the US-led coalition.

The king was greeted by a crowd of several thousand people at Jordan’s main airport on his return from the US, with many holding up pictures of the monarch and the country’s flag in a show of support.

After a meeting with security chiefs, AFP news agency quoted him as saying in a statement: “The blood of martyr Moaz al-Kasasbeh will not be in vain and the response of Jordan and its army after what happened to our dear son will be severe.”

“This evil can and should be defeated,” he said, adding that Jordan was “more determined than ever” to fight the militant group.

The Jordanian military vowed an “earth-shattering” response after IS posted a video online appearing to show the pilot in a cage engulfed in flames.

Rishawi and al-Qaeda operative Ziyad Karboli – both Iraqi nationals – were hanged at 04:00 local time (02:00 GMT) on Wednesday, just hours after the video emerged.

Rishawi had been on death row for her role in attacks in Jordan’s capital, Amman, which killed 60 people in 2005. Karboli was convicted in 2008 of killing a Jordanian national.

IS militants had sought Rishawi’s release as part of a deal to free captive Japanese journalist Kenji Goto, but later killed him.

Safi al-Kasasbeh, the pilot’s father, called for the Jordanian government to do “more than just executing prisoners”.

“I call for [IS] to be eliminated completely,” he told reporters on Wednesday.

An official Saudi Arabian source quoted by the country’s SPA news agency described the killing as a “barbaric, cowardly act, which is not sanctioned by the principles of tolerant Islam… and cannot be perpetrated except by the bitterest enemies of Islam”.

Arab League secretary general Nabil al-Arabi said the killing was “brutal” and “beyond belief”, adding that IS was “a menace which should be stopped”.

Sheikh Ahmed al-Tayeb, the Grand Imam of al-Azhar University in Egypt and one of the leading authorities in Sunni Islam condemned the killing, saying the burning to death of Lt Kasasbeh violated Islam’s prohibition on the mutilation of bodies.

King Abdullah and US President Barack Obama reaffirmed their joint resolve to destroy the group at a meeting in the White House before the monarch left for the Middle East.

Lt Kasasbeh is the first member of the US-led coalition to be killed by IS.

Jordan is one of four Arab states to have taken part in the anti-IS air strikes in Syria. The other countries are Saudi Arabia, the United Arab Emirates and Qatar.

US officials told the BBC on Wednesday that the UAE had suspended its involvement in the strikes after Lt Kasasbeh was captured in December.

The New York Times quoted officials as saying the UAE wanted the Pentagon to improve its search-and-rescue efforts in Iraq before it resumed bombing missions.

24 December 2014: Jordanian Lt Moaz Youssef al-Kasasbeh captured by IS after his plane crashes

24 January: IS calls for release of Sajida al-Rishawi, an Iraqi militant sentenced to death in Jordan

In addition to the horrific voyeurism of the latest hostage murder video from IS, something else stands out – the total inability of the US and its coalition allies to save hostages from the clutches of IS.

For all its multi-billion-dollar intelligence-gathering agencies, its satellites in space, and its highly trained special operations teams, Washington has been unable to mount a successful hostage rescue mission in IS territory.

So this video is not just a warning to Arab pilots taking part in the US-led air strikes, it is a calculated mockery of coalition impotence to stop them murdering their hostages, slowly, in broad daylight, at a time of their choosing.

Everyone knows their base is in Raqqa in northern Syria, and it is no secret that other hostages are still in IS hands.

Efforts may now be increased to find them but an earlier US rescue mission failed, and planners will be looking at the long odds against another one having any more success.