Turkish president Recep Tayyip Erdogan wants to be like a king 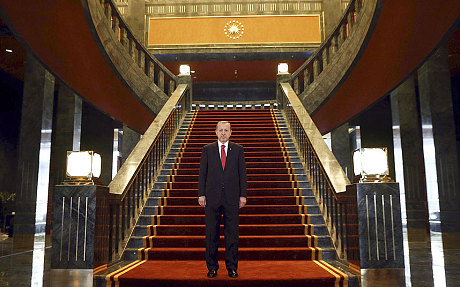 The president stands inside the Ak Saray presidential palace (White Palace) on the outskirts of Ankara, Turkey
Share:
Despite living in the world’s biggest residential palace that cost £384 million ( $580 million) , Recep Tayyip Erdoğan insists he is not seeking to be a sultan, but more like the British Queen.

The Turkish president referred to the UK as an example for Turkey to follow as he explained that changes to the role of the president would not alter the Turkish republic’s democracy.

“In my opinion, even the UK is a semi-presidency. And the dominant constituent is the Queen,” Mr Erdoğan told Turkish state broadcaster, TRT.

The UK has a constitutional monarchy in which parliament decides and makes laws and the Queen’s role is largely ceremonial.

Mr Erdoğan’s comments, reported in Hurriyet Daily News, included an attack on those who said Turkey was becoming like a monarchy and that he aspired to be like an Ottoman sultan despite other countries also having presidents.

Padishah refers to the formal title used for Ottoman sultans during the empire. Those critical of Mr Erdoğan believe he is becoming more authoritarian because of his actions including taking the reins on foreign policy and chairing a cabinet meeting this month.

Mr Erdoğan was elected as president in August last year after 11 years as the country’s prime minister – the first time the country directly elected an individual to the post.

His palace is four times the size of Versailles, the palace in which Louis XIV, the “Sun King” of France resided with 1,000 rooms covering a total floor area of 3.1 million square feet.

His comments come after the recent appeal hearing by Armenia represented by Amal Clooney and the Doughty Street Chambers lawyers on Wednesday.

The country believes the denial of the Armenian genocide by Doğu Perinçek was a crime despite the European Court of Human Rights ruling in 2013 that his conviction of racial discrimination was a violation of his Article 10 right to freedom of expression.

Mr Perinçek said the genocide was an “international lie” in Switzerland in 2005 but the country has laws which criminalise denial as racial discrimination and he was found guilty in 2008.

Turkey does not accept it was a genocide and disputes that up to 1.5 million were killed but in his interview, the president said if history “actually reveal[s] that we have committed a crime, if we have a price to pay, then as Turkey we would assess it and take the required steps,” Washington Post reported.
Telegraph.co.uk