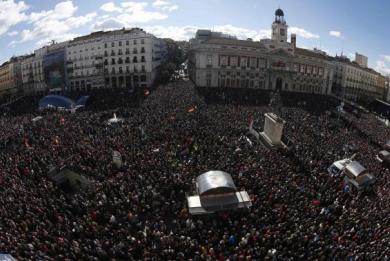 People fill Madrid’s landmark Puerta del Sol as they gather at a rally called by Spain’s anti-austerity party Podemos (We Can) January 31, 2015. [Reuters]
Share:
By catapulting to power an improbable alliance of the hard left and nationalist far right, Greece has shaken up Europe’s political kaleidoscope and may have signaled the end of an era of centrist consensus.

With eight general elections due in the European Union this year, as well as regional votes, the earthquake in Athens may be a harbinger of other shocks to come.

Expect the unexpected in 2015 from Britain to Finland and Denmark to Spain as voters who have endured five years of economic crisis, falling real incomes and welfare cuts vent their anger, anxiety or apathy at the ballot boxes.

Mainstream centre-right and centre-left parties that have dominated European politics since the end of World War Two are bleeding support to populists at both ends of the spectrum, and to mavericks like Italian comic-turned-politician Beppe Grillo.

This theme will be prominent during Reuters’ annual euro zonesummit this week which will interview a host of policymakers from Brussels and key EU capitals.

In many countries, voters feel the established parties offer no real alternative. Many are keen to punish a ruling “caste” perceived as out of touch with ordinary people’s concerns, and as helping themselves rather than their electors.

What unites many of the new forces is hostility to the EU and to policies of austerity driven from Brussels and Berlin.

“We’ve reached the end of a 30-year cycle of liberal individualism and wealth accumulation that began with Ronald Reagan and Margaret Thatcher,” former British Europe minister Denis MacShane said in an interview.

“We’re in for at least half a decade of turbulence and uncertainty in Europe.”

MacShane, whose latest book “Brexit: how Britain will leave Europe” is due out in February, says the last such period of flux was in the 1970s, when a post-war consensus on the welfare state, a mixed economy with a big government role and collective bargaining crumbled, at least in Britain and the United States.

Whether anti-establishment outsiders will win power anywhere other than Greece remains to be seen. But they seem set to make government more awkward and less stable everywhere.

“In hindsight, the governments we have had in Europe since 2011 may have been as good as it gets,” said Tina Fordham, chief global political analyst at U.S. bank Citi. “The outlook everywhere is for weaker governments with significant unpredictable, untested non-mainstream components.”

Greeks have suffered higher unemployment, deeper poverty and more social dislocation than any other Europeans since they became the first euro zone country to seek an international bailout in 2010.

Greece is also probably the country where the traditional political class has been most discredited by corruption scandals and tax avoidance, nepotism and fiddled statistics.

Spain’s two mainstream parties that have alternated in power since the fall of fascism have also been tarnished by a string of sleaze affairs. They are seen by many Spaniards as sharing the blame for the collapse of a property bubble that triggered tough austerity measures.

As in Greece, one young Spaniard in two is out of work.

That has fuelled the rise of the year-old utopian left-wing Podemos (Yes We Can) party, led by charismatic young academic Pablo Iglesias. It leads both Prime Minister Mariano Rajoy’s conservative Popular Party (PP) and the opposition Socialists (PSOE) in opinion polls.

Iglesias, 36, who is close to Greek Prime Minister Alexis Tsipras, 40, may gain credibility from Syriza’s victory, especially if the new Athens government is able to negotiate some debt relief and an easing of austerity.

However, Tsipras’ alliance with the hard right Independent Greeks has jarred with leftists in southern Europe — it would hard to imagine France’s anti-capitalist Left Party led by Jean-Luc Melenchon teaming up with Marine Le Pen’s National Front.

The prospect of months of confrontation between Athens and Brussels amid potential financial instability may deter Spanish voters from risking a vote for Podemos by the time the election comes around in December, or drive the PP and the PSOE to form a German-style grand coalition government.

Another country where anti-establishment radicals could upset the applecart is Britain, which votes on May 7.

The governing Conservatives and the opposition centre-left Labour party are neck-and-neck in opinion polls that suggest neither is likely to win an overall majority.

That could make for an unstable government dependent on one or possibly two smaller parties for its survival. If Prime Minister David Cameron’s Conservatives come out on top, expect two years of uncertainty and market jitters ahead of his promised referendum on whether Britain stays in the EU.

With the centrist Liberal Democrats facing big losses after five years of coalition with the Conservatives, potential king-makers range from the anti-immigrant UK Independence Party, which wants to take Britain out of the EU, to the Scottish National Party, which has gained ground since narrowly losing a referendum on independence last year.

Veteran political scientist David Butler, the father of British opinion polling, says he has not seen a more uncertain election since 1945.

Two other countries where untested nationalist forces could be knocking on the door of government, are Finland, where Timo Soini’s Eurosceptic Finns party is bidding for a share of power in April, and Ireland, which votes in early 2016 with leftist Sinn Fein surfing a wave of anti-austerity sentiment.

Even countries such as Ireland and Spain which are now seeing the return of healthy economic growth rates may not reward the parties that led them through the crisis because most ordinary citizens still feel worse off.