Next round of Syria talks in Moscow in a month: report 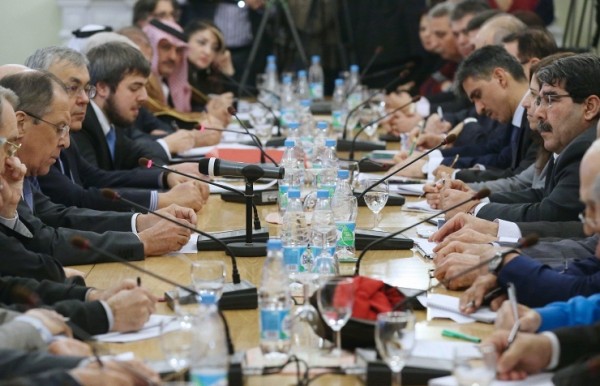 The next meeting between some Syrian opposition figures and the Damascus government in Moscow will take place in about a month, Qadri Jamil, a participant in this week’s consultations, said on Friday.

The Moscow talks, which ended on Thursday, are not seen as yielding a breakthrough as they were shunned by the key political opposition and did not involve the main insurgent groups fighting on the ground in Syria.

“The key thing is that the process started rolling,” said Jamil, a of member Syria’s tolerated internal opposition who served as deputy prime minister from 2012 to 2013. He was speaking through a translator at a news conference.

At the end of the talks, Russian moderator Vitaly Naumkin, presented what he called “the Moscow principles” – a list of provisions he said the government and the opposition delegations endorse in principle.

The 10-point list largely echoes Moscow’s own stance on the conflict, which has killed more than 200,000 people since protests against President Bashar al-Assad started in early 2011 and then descended into a war in which radical Islamists have now gained the upper hand among the anti-Assad forces.

“We were hoping for better results than those reached in the end,” Majid Habbo of the opposition National Coordination Committee said, speaking through a translator.

“But it is very important that it creates better conditions to continue the Geneva process,” he said of peace talks that stalled early last year.

The “Moscow principles”, among others, urge fighting terrorism in Syria. But they do not include opposition calls to free political prisoners and address the problem of those kidnapped or missing.

Speaking by a large Assad portrait in the Syrian embassy in Moscow, the head of the Damascus government delegation, Bashar al-Ja’afari, said after the talks that the opposition members attending failed to come up with a unified stance.

Moscow has been a long-standing ally of Assad, whose government has dubbed many of its opponents as terrorists.

Russia says combating terrorism should be a top priority in Syria. It called on the opposition to join forces with Assad to that end and criticized Washington for refusing to cooperate with Damascus over air strikes on Islamic State positions.

Syria opposition figures who shunned the meeting in Moscow dismissed it as an attempt to prop up Assad and quoted Russia’s backing for the Syrian president as the main reason. They said they would only take part in talks that lead to his dismissal.

Those who attended broadly agree that fighting Islamic State and other extremist Islamic groups on the ground comes first, and that the fate of Assad could only be decided later.