Syrian Kurdish town Kobani needs to be rebuilt from scratch, ‘everything is destroyed’ 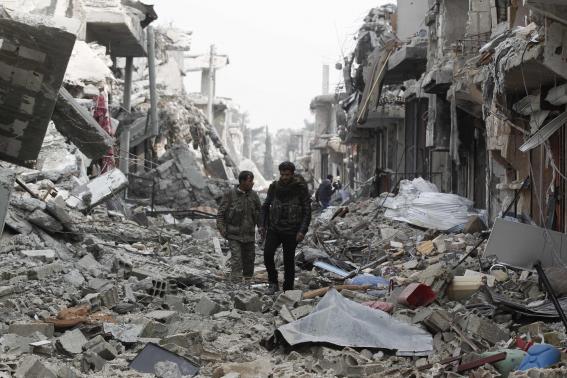 Sheets meant to hide residents from snipers’ sights still hang over streets in the Syrian border town of Kobani, and its shattered buildings and cratered roads suggest those who fled are unlikely to return soon.

Kurdish forces said this week they had taken full control of Kobani, a mainly Kurdish town near the Turkish border, after months of bombardment by Islamic State, an al Qaeda offshoot that has spread across Syria and Iraq.

Their victory, raising Kurdish flags where the black symbols of Islamic State once flew, prompted celebration among the more than 200,000 refugees who have fled to Turkey since the assault on the town began in September.

Cold weather, poverty and hunger have left many eager to return home and try to rebuild their livelihoods.

But months of intense fighting have hollowed out their town. Wrecked vehicles lie besides buildings reduced to piles of rubble and the roads are scarred by craters meters deep.

Tired and tense Kurdish fighters patrol near-deserted streets, and the risk of unexploded ordnance leaves the few civilians who remain fearful of where to tread.

“Coming back to Kobani will be even more difficult than leaving it,” said one fighter from the Kurdish People’s Protection Units (YPG), clutching a machinegun and standing in front of the ruins of a building.

“This city needs to be rebuilt from scratch. Everything is destroyed,” he said, pointing to a pile of debris as tall as the single-story building next to it.

Kobani, nestled in hills and separated from Turkey by little more than a disused railway line, became a focal point for the international struggle against Islamic State, partly because of the heavy weaponry and number of fighters that the ultra-hardline Islamist group poured into the battle.

With the help of daily air strikes by U.S.-led forces, air drops of weapons and ammunition, and fighters from the Kurdish autonomous region in Iraq, Kobani’s defenders managed to push out the insurgents and declare a tentative victory on Monday.

YPG fighters raised two fingers in victory signs for a group of journalists being escorted around Kobani, but behind the shows of pride a tense mood still hung over the town.

“Mortar shells keep landing here. Don’t wander around, it’s dangerous,” cautioned one of the fighters, guarding a central square, as a group of his fellow combatants patrolled surrounding streets on motorbikes.

Battles have continued in villages to the southeast and southwest of Kobani since the Kurds declared victory. The Pentagon said on Monday the fight for the town was not over and a senior U.S. State Department official said it was too soon to declare “mission accomplished”.

Islamic State supporters have denied the group has been pushed out.

Turkish President Tayyip Erdogan, who has been wary of supporting Syrian Kurds amid concern about a push for Kurdish autonomy in northern Syria, questioned this week how much there was to celebrate.

“When it is about Kobani, the whole world stands up and cooperates … Today they are dancing with happiness. What happened?” he told a meeting of local government officials in his palace in Ankara.

“(Islamic State) is out of there, fine. But who will repair all those places you bombed? Will those 200,000 who fled Kobani be able to go back? When they are back, where will they live?” he asked.