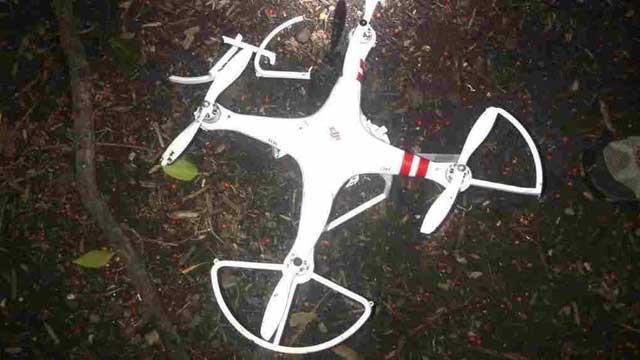 It was 42 degrees and raining lightly around 3 a.m. on Monday when an inebriated off-duty employee for a government intelligence agency decided it was a good time to fly his friend’s drone, a 2-foot-by-2-foot “quadcopter” that sells for hundreds of dollars and is popular among hobbyists.

But officials say the plan was foiled, perhaps by wind or a tree, when the employee — who has not been named by the Secret Service or charged with a crime — lost control of the drone as he operated it from an apartment just blocks from the White House.

He texted his friends, worried that the drone had gone down on the White House grounds, and then went to sleep. It was not until the next morning, when he woke and learned from friends that a drone had been found at the White House, that he contacted his employer, the National Geospatial-Intelligence Agency. He then called the Secret Service and immediately began cooperating with an investigation into the incident.

In the process of what officials describe as nothing more than a drunken misadventure, the employee managed to highlight another vulnerability in the protective shield that the Secret Service erects around the White House complex.
The small drone, called a DJI Phantom, evaded White House radar that is calibrated to warn of much bigger threats, like an airplane or a missile. Although White House officials characterized the drone as not dangerous, it nonetheless has raised serious questions about how secure President Obama and his family are when they are home.

Over the past several years, the Secret Service’s air branch has intensively studied ways to stop small drones that could be operated by terrorists or people determined to harm the president, law enforcement officials said. A classified review of how to bring down small drones has led the agency to try to develop new ways to detect them. An on-duty officer at the White House spotted the drone flying near the residence on Monday, but could not stop it.

A spokesman for the geospatial-intelligence agency confirmed on Tuesday that the Secret Service had questioned a government employee the day before in connection with the drone episode.

“The employee self-reported the incident Monday,” said the spokesman, Don Kerr. “The employee was off duty and is not involved in work related to drones or unmanned aerial vehicles in any capacity at N.G.A.”
Mr. Kerr said in a statement that the employee had used “a personal item,” but that the agency took the incident seriously. He declined to identify the employee or say what disciplinary action, if any, was being taken.

Secret Service investigators were trying to verify the employee’s account on Tuesday as they interviewed people he said he had contacted in the hours before the episode. They were also examining his text messages and phone records as well as analyzing video footage from cameras around the apartment where the man said he had operated the drone.

Although planes are restricted from entering the airspace around the White House and it is illegal to operate a drone in Washington, it is unclear whether the man will be charged with a crime. Some Secret Service officials believe he should be prosecuted in an effort to deter others.

Officials at the geospatial-intelligence agency — which is based near Springfield, Va., as part of the Defense Department — prefer to stay out of the headlines. The agency uses satellites to gather data for the military and other law enforcement and intelligence agencies. According to its website, the agency played a role in helping locate the compound in Pakistan where Osama bin Laden was hiding. Using high-resolution photographs of the compound taken by satellite, the agency then helped create a replica of the compound so that a team of Navy SEALs could rehearse the raid in which bin Laden was ultimately killed in 2011.

The website says the agency also helped discover atrocities in Kosovo, provided support for intelligence operations during the Olympics and assisted in the response to Hurricane Katrina.

James R. Clapper Jr., the current director of national intelligence, became the head of the agency, then called the National Imagery and Mapping Agency, just days after the Sept. 11, 2001, attacks.

The episode could prove embarrassing to the head of the geospatial agency, Robert Cardillo. Until he took over the agency last October, Mr. Cardillo was the deputy director of national intelligence, who frequently provided Mr. Obama with his daily intelligence briefing.

The drone incident is the latest to raise questions about the security of the White House. It occurred four months after a man with a knife climbed over the White House fence and made it deep inside the building before officers tackled him. In 2011, a gunman three-quarters of a mile away from the White House fired shots that hit the building while one of the Obama daughters was home.

Mr. Obama, who was traveling abroad, declined to comment on the drone episode. But in an interview with CNN broadcast on Tuesday morning, he said he had instructed federal agencies to examine the need for regulations on commercial drone technology.

Mr. Obama said he had told the agencies to make sure that “these things aren’t dangerous and that they’re not violating people’s privacy.” He said that commercially available drones empower people, but that the government needed to provide “some sort of framework that ensures that we get the good and minimize the bad.”

“There are incredibly useful functions that these drones can play in terms of farmers who are managing crops and conservationists who want to take stock of wildlife,” the president told the CNN commentator Fareed Zakaria. “There are a whole range of things we can do with it.”

But Mr. Obama noted that the drone that landed at the White House was the kind “you buy at RadioShack.” And he said the government had failed to keep up with the use of the flying devices by hobbyists and commercial enterprises.

“We don’t really have any kind of regulatory structure at all for it,” Mr. Obama said.