Obama could be the last jumbo jet customer 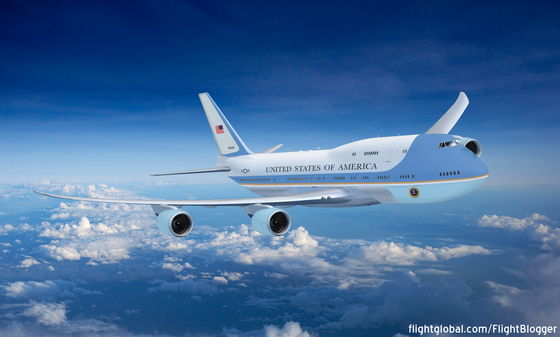 One of the world’s most exclusive customers could be the last buyer of the aircraft that democratised long-haul air travel after the US defence department selected Boeing’s 747-8 to be the US president’s new Air Force One.

The new aircraft will replace a pair of 747-200s that came into service as the presidential aircraft in 1990, during the presidency of George HW Bush. The type became an all but inevitable choice after the Pentagon decided that the presidential aircraft needed to have four engines. The only other currently manufactured four-engine long-haul jet is Airbus’s A380, manufactured in France.
The Pentagon announced on Wednesday that it planned to award the contract on a “sole-source” basis to Boeing after negotiation but that it would encourage competition between suppliers to equip the aircraft interior. The Pentagon specified neither precisely how many aircraft it would order nor when they would enter service.

Boeing currently has 24 passenger 747-8s and 12 747-8F freighters on order but has been struggling according to analysts to win new orders for the aircraft. It has slowed production to three every two months.

Richard Aboulafia, an analyst with the Virginia-based Teal Group, said there was a possibility that Boeing would close the 747 production lines — which have been rolling since the late 1960s — after the presidential aircraft rolled off.

“There is the risk now that this order provides the opportunity for a graceful exit — unless cargo demand comes roaring back,” Mr Aboulafia said.

Loren Thompson, an analyst at the Virginia-based Lexington Institute, said airlines increasingly favoured twin-engine aircraft such as Boeing’s 777 and 787 for long-haul routes, rather than larger, four-engine aircraft.

“Airlines prefer to have more flexibility,” he said.

The presidential order would provide a fitting end to production of an aircraft type that helped sharply to reduce the cost of long-haul air travel by accommodating up to 490 passengers on a single aircraft, bringing down costs per seat. The aircraft first flew in February 1969.

However, Boeing insisted on Wednesday it was still seeking other orders for the aircraft.

“We continue to pursue campaigns for both the 747-8 Intercontinental and freighter,” it said.

The announcement came on the same day that Boeing announced better than expected full-year results that had sent its shares up 5.4 per cent to $139.64 by close of trading.