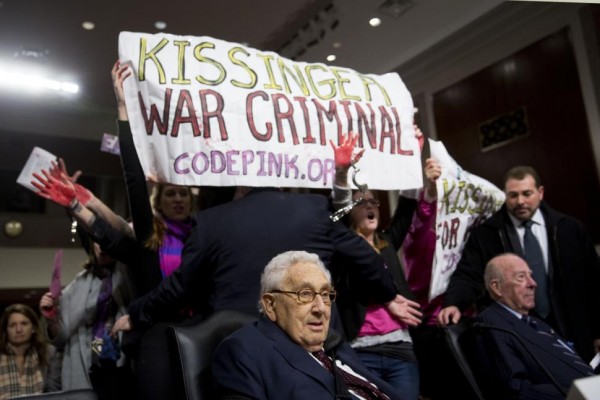 The protesters, bearing signs reading “Kissinger War Criminal” and “Cambodia,” rushed up behind the 91-year-old diplomat at the witness table of the Senate Armed Services Committee, which was holding a hearing on global challenges and the U.S. national security strategy.

“I’ve been a member of this committee for many years, and I have never seen anything as disgraceful and outrageous and despicable as the last demonstration that just took place,” McCain said, which led to shout-backs from the protesters.

“You know, you’re going to have to shut up, or I’m going to have you arrested. If we can’t get the Capital Hill Police in here immediately… Get out of here, you low-life scum,” McCain added.

“So Henry, I hope you will — Dr. Kissinger, I hope on behalf of all of the members of this committee on both sides of the aisle — in fact, from all of my colleagues, I’d like to apologize for allowing such disgraceful behavior towards a man who served his country with the greatest distinction. I apologize profusely.”

Later, when Kissinger began his opening statement, more protesters popped up in the room, screaming about Vietnam and rattling off his “war crimes.”

“Vietnam! From 1969 to 1973, Kissinger, working for Richard Nixon, oversaw the slaughter in Vietnam, Cambodia and Laos, that led to the deaths of millions — millions of people. Many thousands more died from the effects of massive doses of agent orange and from unexploded bombs that covered the countryside!” a protester shouted. “Chile! Henry Kissinger was one of the principle architects of the coup in Chile on September 11th, 1973…”

Shultz then stood up to verbally battle the protesters, saying, “I salute Henry Kissinger for his many contributions to peace and security.” That led to a standing ovation from the committee members and audience that drowned out Code Pink.