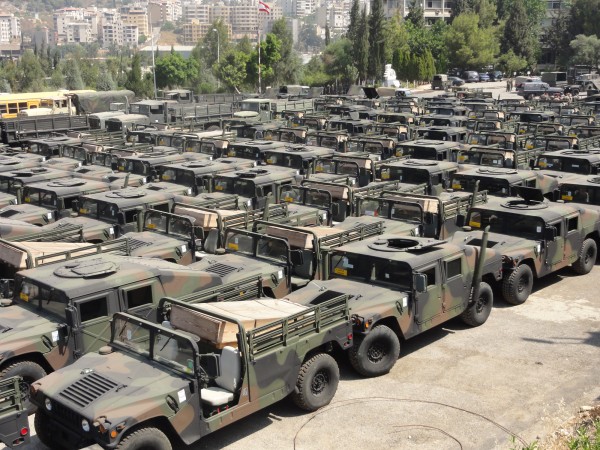 Lebanon received a shipment of military vehicles as part of the United States military assistance program to the Lebanese Armed Forces.

According to the US embassy  the vehicles are  to aid the Lebanese army in its mission to combat terrorist threats, in particular along its eastern border.

The U.S. embassy announced via its  Twitter account on Twitter that the U.S. “delivered dozens more brand new armored Humvees to protect the Lebanese army soldiers in the line of duty.”

The embassy stressed that  the Humvees are the “best armored vehicle on the market.”

The embassy added   that the U.S. assistance aims at delivering the  aid to the “brave soldiers of the Lebanese army.”

The U.S.  stepped up its military assistance to Lebanon last year  to boost the capabilities of the Lebanese army and security agencies capabilities in the war against terrorism.

The last  2 shipments of  arms and ammunition as part of the U.S. military assistance program was Sept 2014

Other arms shipments were delivered on August 29 , 2014

He stressed that  American military support for Lebanon would be long-lasting..

“I can assure you deliveries will be constant, just as our partnership with Lebanon has been constant over the years.” Hale said