Saudi King Abdullah laid to rest in an unmarked grave 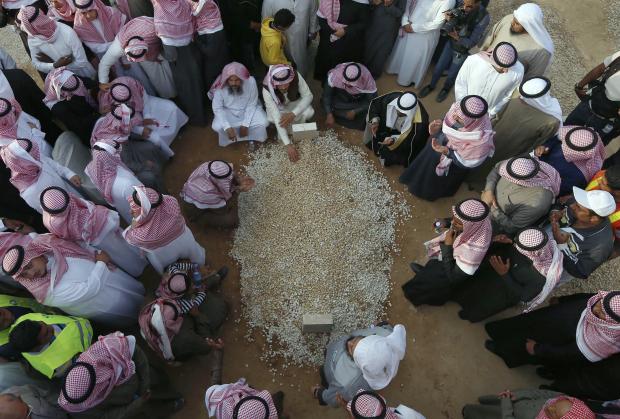 King Abdullah was laid to rest in an unmarked grave in a modest cemetery in Riyadh. It’s all in keeping with the traditions of Wahhabism, a strict branch of Sunni Islam practiced in Saudi Arabia.
Share:

As rumors about the health of Saudi Arabia’s King Abdullah started swirling over social media before midnight on Thursday, many people here didn’t want to believe them.

The king was personally popular, with many Saudis seeing him as a fatherly figure who cared deeply about his people and spoke to them in honest and plain words.

It was a long night. The official announcement from the royal court of the king’s death came at 2:15 a.m. on Friday, followed immediately by another announcement declaring Crown Prince Salman as king. Saudis who went to bed early woke up in their weekend morning to the news of the death of one king and the ascension of another.

King Salman spoke to the people shortly before noon. State television aired a brief recorded statement, showing the 79-year-old monarch sitting at a desk and reading from a green leather folder, as he mourned his half-brother and stressed the importance of unity.

As the body of the former king was being prepared for burial, the new king moved swiftly with a series of six royal decrees promoting his son to defense minister and appointing his nephew as deputy crown prince, setting a path for future succession that will see power move from the founder’s sons to his grandsons.

Leaders of the Arab world began descending on Riyadh on Friday afternoon to attend the funeral. As soon as they landed, they quickly went to the Imam Turky bin Abdullah Mosque, where members of the Saudi royal family waited for the prayer to begin.

The sons of King Abdullah entered the mosque carrying the body of their father on their shoulders and laid it on the mosque’s ground. The kingdom’s Grand Mufti led prayers, asking God for mercy on the deceased king. After prayer Abdullah’s sons again carried his body above their shoulders, heading toward the modest Oud Cemetery where other Saudi monarchs are also buried.

King Salman arrived in the same black vehicle that carried the body. A grave was already dug in the brown sand of the barren cemetery.

Under a mild winter sun and blue sky lined with clouds, the king and members of the royal family solemnly stood around the grave as Abdullah’s body, shrouded in white, was slowly laid in the ground. The grave was soon covered with sand, with only two small stones at both ends. The stones carried no words or signs. The grave looked like any others in the cemetery. Nothing distinguished it as the resting place of the king from that of a common subject.

It was a brief and simple affair, keeping in line with the Wahhabi traditions of Sunni Islam practiced in the kingdom. These traditions warn against idolizing the dead and instruct mourners to restrain their display of grief.

Shortly after the burial, King Salman, walking with a cane and wearing sunglasses, made his way toward his car as mourners approached to kiss his hand.

It is only a 10-minute drive from the cemetery to the royal palace, where King Salman would assume his new responsibilities and a new reign would begin.