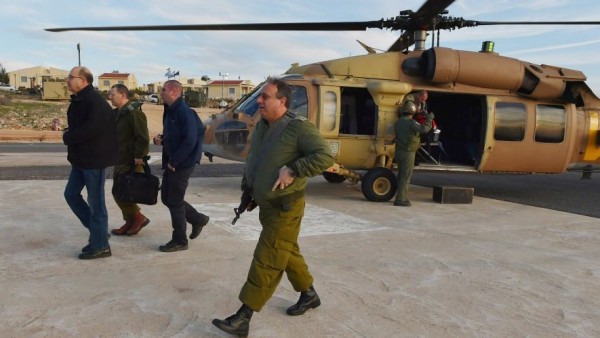 “Israel will hold the governments, regimes and organizations beyond its northern border responsible for what emanates from their territory,” Yaalon said in a statement. “[Israel] will exact a price for any harm inflicted on Israeli sovereignty, civilians and soldiers.” He added.

Amid high tensions with Hezbollah and its backer, Ya’alon visited the headquarters of the IDF’s Northern Command on Friday.

Ya’alon vowed that Israel will not tolerate attempts to harm it, and would respond “with force against any such attempt.”

He was joined by the Northern Command chief Maj.-Gen. Aviv Kochavi (who was until recently commander of Military Intelligence), the head of the Operations Branch Maj.-Gen. Yoav Har Even, and other senior officers from the command.

Fears of retaliation by Lebanon’s Hezbollah or other groups have risen since Sunday’s attack, prompting Israel to reinforce its northern borders with Lebanon and Syria.

Hezbollah under pressure to act

The leader of Hezbollah’s militant group warned in a recent interview that allies of Syrian President Bashar al-Assad would strike back if Israeli attacks inside Syria continued.

Few expected Hassan Nasrallah’s comments to be put to the test so quickly.

The attack put Hezbollah under pressure to respond, sources close to the group said, and also put a ceasefire between Israel and Syria at risk. The group’s leadership has yet to comment.

“This attack shows that Israel has crossed the red line in the security war with Hezbollah, which means the rules have changed,” said a senior security source close to the group.

Hezbollah issued a statement saying “what is stated in the Reuters report did not come” from the group.

Israel has struck Syria several times during the present conflict, hitting weapons deliveries to Hezbollah, but the group has never acknowledged those attacks. This time the importance of those killed, in addition to Nasrallah’s warning, make the latest raid difficult to ignore.

“If the group does not respond it means it is stuck in Syria’s mud and has lost its deterrent ability.” A source was quoted by Reuters as saying Thursday

A Lebanese official close to Hezbollah said: “We should expect retaliation from Hezbollah, but it will be done coldly.”

Its options are limited. It could strike from its stronghold in Lebanon, triggering all-out war with Israel. It could attack targets in Israel, but risk a wider war between Israel and Syria, or hit Israeli interests abroad. But all come at a price.

An Israeli defense official told Reuters that a response from Hezbollah was expected, but in the form of limited attacks unlikely to lead to all-out war.

The recent Israeli strike serves as proof that Israel and “takfiri” groups share the same objective in Syria, Hezbollah MP Hassan Fadlallah said at a ceremony in Adsheet village of Nabatieh, south Lebanon on Friday.

“This attack proved again the convergence between the Israeli plan and that of the takfiri groups, which [both] aim to destroy the resistance by targeting Syria,” Fadlallah said

“This convergence is not only manifested in the military aid and hospitalization services, but also in direct military intervention, which happened in Qunaitra and in the previous Israeli assaults on Syria.” He added.

The Shiite Hezbollah  group, the Syrian regime and Iran  refers to the Sunni rebels as takfiris.

He said the attack on the convoy was proof that Hezbollah has succeeded in foiling Israel’s plans in Syria, and that its ultimate battle is against the “Zionist project.”

Fadlallah said the development was enough to answer the criticism of the opponents of Hezbollah’s involvement in the Syrian war.

“They were killed defending Palestine, Syria, the resistance, Lebanon and its people,” he said. “The place and time have their own significance. The Israeli felt that his plan, on which he built dreams and expectations, has begun corroding due to the persistence of resistance in Syria.”

Convening under Prime Minister Tammam Salam at the Grand Serail, the government blasted the Israeli aggression on the Syrian town of Qunaitra, Information Minister Ramzi Joreige said after the session, which lasted for over five hours.

Speaking at the outset of the session, Salam touched on the “dangerous developments the region was witnessing which could affect our internal affairs,” a reference to the Qunaitra attack.

Iran on Tuesday threatened to retaliate in response to the Israel attack .
Despite warning Israel of “devastating thunderbolts”, however, analysts said Tehran is likely to react cautiously in order to avoid jeopardizing negotiations over its nuclear programme.

Mohammad-Ali Jafari, commander of Iran’s Revolutionary Guards, on Tuesday warned the “Zionists” that his forces would step up their support for anti-Israel movements throughout the region until “this epitome of evil” was “eliminated” from the Middle East.

However, Hamid-Reza Taraghi, a conservative Iranian politician, said that Iran was not seeking an escalation of tensions with Israel but stressed that there had to be a response.

A banner across Hezbollah’s al-Manar news website read “Prepare your (bomb) shelters”, in Hebrew and Arabic.