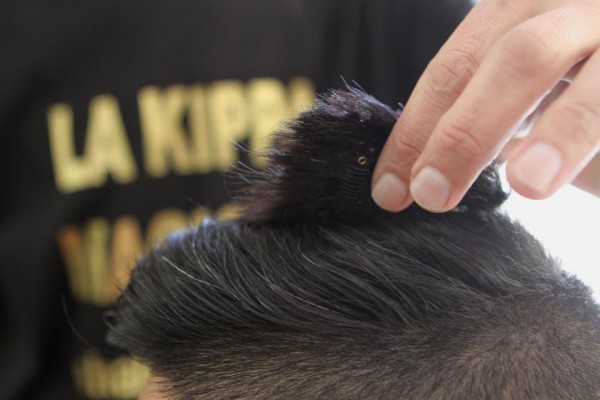 An Israeli barber has fashioned what he calls “magic” yarmulkes out of hair, designed to allow religious Jews to cover their heads without attracting unwanted attention from anti-Semites.

Shalom Koresh said his skullcap, known as a yarmulke in Yiddish and a kippa in Hebrew, was inspired by rising anti-Semitism in Europe and elsewhere. He said he has seen particular interest from buyers in France and Belgium.

“This skullcap is washable, you can brush it, you can dye it,” Koresh said in his salon in central Israel. “It was created so people could feel comfortable going to places where they are afraid to go, or places where they can’t wear it, and feel secure.”

France has seen a spike in anti-Semitic attacks in recent years. The killing of four French Jews in a hostage standoff at a Paris kosher market earlier this month has deepened fears among European Jews.

Officials in Israel are expecting — and encouraging — a new influx of Jewish immigrants following the Paris standoff. Since the attacks, Israeli Prime Minister Benjamin Netanyahu has encouraged European Jews to move to the Jewish state.

Many Jews in Europe, especially France, say they feel unsafe walking around wearing the symbols of their faith. A 2013 European Union report found that one in five European Jews avoid wearing kippas or other Jewish symbols for fear of being harassed or attacked. The skullcap could also serve Jews traveling to the Middle East, where they encounter hostility in many Arab countries.

Koresh’s hairy skullcap, which he has dubbed the “Magic Kippa,” comes in an array of shades and colors. He sells them online, starting at 49 euros (56 dollars) for synthetic hair and 79 euros (91 dollars) for ones made of natural hair. The skullcap can be fastened onto the wearer’s real hair with hidden clips.

“You don’t feel a thing. It feels like it is part of your hair. There isn’t such a difference between this and a regular kippa. It feels the same,” said Maor Hania, who modelled a dark brown skullcap at Koresh’s salon.

Devout Jewish men traditionally wear skullcaps as a sign of respect and reverence for God. Rabbi Shlomo Aviner, who teaches at a prominent Jerusalem yeshiva, said that Jewish skullcaps must be visible and not hidden, but added that under certain unforeseeable circumstances, such as a risk of attacks, the “Magic Kippa” may be valid.

“Our sages said that, for example, when we are in danger, then it’s possible (to hide it),” he said, adding that the wearer should consult his own rabbi for guidance.

The hairy kippa received mixed reactions among skullcap-wearing men in Jerusalem. Some said they felt ill at ease with the idea of hiding their identity abroad, but others welcomed the protection.

“It’s very dangerous in France right now and it’s dangerous for a person to walk outside with a kippa,” said Richard Altabe, who wore a regular black kippa atop his silver hair. “So if this is how they can maintain their religious commitment, why not?”