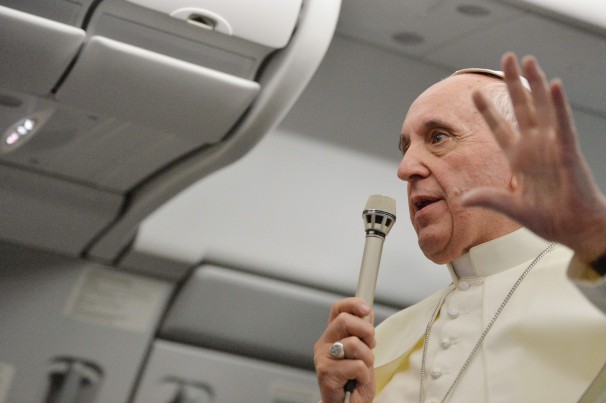 Pope Francis, after a visit to the largest Catholic nation in Asia, says Catholics may have a moral responsibility to limit the number of their children and need not reproduce “like rabbits.”

But the pope also reaffirmed the church’s ban on artificial means of birth control and said Catholics should practice “responsible parenting.”

His comments on the subject of birth control, made aboard the papal jet returning to Rome from the Philippines, were described as apparently unprecedented by the National Catholic Reporter, an independent news organization that follows the Vatican.

Francis said there are plenty of church-approved ways to regulate births. He also said no outside institution should impose its views on regulating family size, blasting what he called “ideological colonization” of the developing world.

African bishops have long complained that Western ideas about birth control and gay rights are being imposed on the developing world by groups, institutions or nations, often as a condition for development aid.

“Every people deserves to conserve its identity without being ideologically colonized,” Francis said.

Francis spoke for nearly an hour Monday, taking questions from reporters traveling with him. He was asked about remarks he made last Friday, in which he warned against such colonization in an apparent reference to moves to legalize same-sex marriage and use of contraception.

The pope’s comments, including his defense of the Catholic Church’s ban on artificial contraception, signal he was showing his more conservative side, often overlooked as media coverage has focused on his populist persona, NCRonline.org reported.

It said he stated his strongest defense yet of the church’s 1968 document enshrining the church’s opposition to artificial birth control. He warned against “insidious attacks” on the family, in what the online Catholic publication said was a reference to gay marriage legalization.

At the same time, however, he said it’s not true that to be a good Catholic “you have to be like rabbits,” Associated Press reported from the plane. Instead, he said, “responsible parenthood” requires that couples regulate the births of their children, as church teaching allows.

David Gibson, who covers the Catholic Church and the Vatican for Religion News Service, said in an interview that Pope Francis’ remarks reinforced the Vatican’s 1968 letter on birth control by Pope Paul VI, when he rejected contraceptives such as “the pill.” But he said Francis did so with his more plain-spoken, pastoral voice.

“He’s bringing back the human side of Catholic teaching, the pastoral side,” Gibson said.

“I think the pope in his very colloquial, personal way expressed that and conveyed that better than anyone has,” Gibson said. “He’s not upending centuries of church teaching. He’s just saying we have rules but we have to be merciful. We have to use common sense.”

The pope cited the case of a woman he met who was pregnant with her eighth child after seven Cesarean sections. “That is an irresponsibility!” he said. The woman might argue that she should trust in God. “But God gives you methods to be responsible,” he said.

He said there are many “licit” ways of regulating births that are approved by the church, an apparent reference to the family planning method of monitoring a woman’s cycle to avoid intercourse when she is ovulating.

“God gives you methods to be responsible,” he said, according to the National Catholic Reporter’s account. “Some think that — excuse the word — that in order to be good Catholics we have to be like rabbits. No.”

Use of contraception in the Philippines is a contentious issue, as the Philippine government only recently approved contraceptive access against forceful opposition from Catholic bishops, the National Catholic Reporter said.