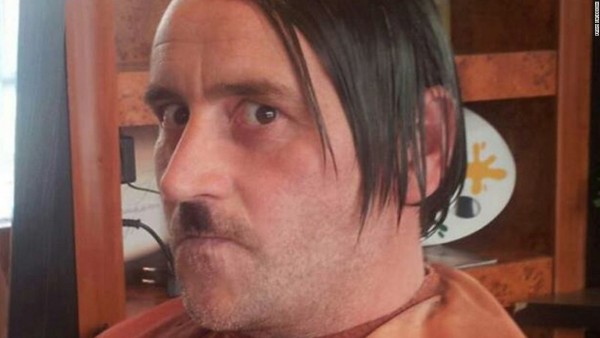 As thousands-strong anti-Islamization rallies make headlines in Germany following the Charlie Hebdo attack, one of the rallies’ organizers has resigned as leader of a right-wing group after a newspaper published a months-old selfie of him posing as Adolf Hitler.

The photo shows Lutz Bachmann, leader of PEGIDA, which translates in English to Patriotic Europeans Against the Islamization of the West. It appeared Wednesday on the cover of German tabloid BILD.

Bachmann resigned as chairman of the group following the backlash to the Hitler photo and another image in which Bachmann appeared in a Ku Klux Klan robe with the caption, “Three K’s a day keeps the minorities away.”

“I apologize to everybody who has felt attacked by my online postings. They were comments made without serious reflection, which I would no longer express today. I am sorry that I thereby damaged the interests of our movement, and draw the appropriate conclusion,” Bachmann said in Dresden on Wednesday.

Bachmann also has previously posed as a Ku Klux Klansman.
The selfie was an act of satire, his spokeswoman Kathrin Oertel said on Facebook. While every citizen has the right to engage in satire, she wrote, insulting foreigners is not satirical.

Though Bachmann apparently has deleted his own Facebook account, screen grabs published by numerous media outlets suggest Bachmann posted the Hitler photo in September, while the KKK image is from 2012.

Bachmann told BILD, “I took the photo at the hairdressers, for the publication of the audiobook of the satire ‘He’s Back.’ … You need to be able to joke about things now and then.”

“He’s back,” or “Er ist wieder da” in German, is a 2012 best-selling satire based on Hitler waking up in modern-day Berlin with no knowledge of what happened following World War II.

The audiobook was released long before September, as January 2013 news reports indicate 75,000 copies had already been sold.

It appears the images gained traction not because of timeliness but because PEGIDA has successfully organized weekly anti-Islamization demonstrations in Dresden. Police estimated that 18,000 people attended a January 5 rally, while about 25,000 people showed up at a January 12 rally.

Monday’s scheduled protest in Dresden was canceled after police persuaded PEGIDA to call it off following an ISIS fatwa targeting PEGIDA’s organizers, the group wrote on the Facebook page for its United Kingdom branch.

“The police has canceled the rally in agreement with PEGIDA because they can’t guarantee the security and safety of participants after information of planned attacks by islamistic groups,” the Facebook post said.

In response to Monday’s cancellation, LEGIDA, the city of Leipzig’s offshoot of PEGIDA, said it was organizing a rally expected to draw between 30,000 and 60,000 demonstrators, according to German media. As many as 4,000 police officers had been recruited from around the country in preparation for the event, one news outlet reported.

On its main Facebook page, which has more than 155,000 “likes,” PEGIDA has stated its philosophy that citizens should “wake from their slumber” and recognize the “danger in the Islamic ideology.” “Stop the radical Salafists’ Islamization,” it urges. “As a society, we should give people the chance to integrate, but we should not allow ourselves to be Islamized thereby losing our freedom and democracy!”

The group claims to have supporters in more than 30 German cities and 18 countries in Europe. A PEGIDA group in Norway also called for demonstrators to gather outside Town Hall in the capital, Oslo, earlier this month to show support for the French and demonstrate opposition to what it calls the “Islamification of Norway.”

German Justice Minister Heiko Maas and Chancellor Angela Merkel have called on the group to cancel the rallies in Dresden and other German cities. Counterprotests have taken place or been planned in Hanover, Düsseldorf, Hamburg, Munich, Dresden, Leipzig and Berlin.

During a January 5 demonstration, Germany’s Cologne Cathedral turned off its lights in a symbolic rejection of the rally taking place in its shadow.

Joerg Forbrig, a European analyst with the German Marshall Fund of the United States, told CNN that the PEGIDA’s message resonated only in the Dresden area, where its ideas had fallen on “particularly fertile soil.”

“These protests are not so much fueled by fear of Islam and fear of Islamist attacks, but by frustration at the cost of reunification — about the way they are being integrated and represented since the fall of the Berlin Wall,” Forbrig said.

Dresden already had a well-established network of right-wing extremists before PEGIDA’s emergence, he said.

“It’s more a case of East Germans not entirely feeling at home in Germany,” Forbrig said. “There is a feeling of second-class citizenship, and in order to be heard, many East Germans take to radical measures.”