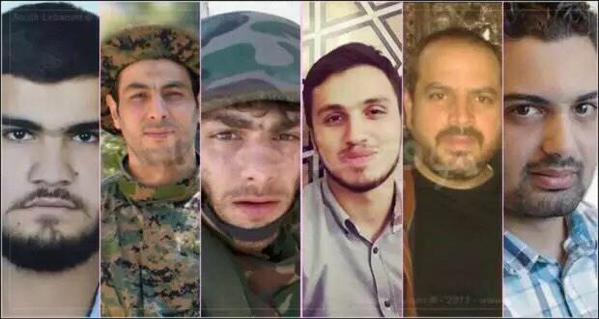 The six Hezbollah fighters /commanders that were killed in the Golan , Syria by an Israeli air strike
Share:

Israel’s strike on an Iranian general in Syria has prompted ominous warnings from both Tehran and its Hezbollah allies in Lebanon, including the threat of “devastating thunderbolts” against the Jewish state. As alarming as some of the rhetoric may be, neither party is likely to risk major retaliation against Israel, Middle East experts said. Instead, Hezbollah and Iran are likely to temper their response so as not to provoke a military escalation neither of them can afford to sustain at the moment.

Along with Revolutionary Guards General Mohammed Allahdadi, five other Iranian military men were killed in the Israeli strike on Sunday, as well as six members of Hezbollah, including the Lebanese militant group’s Golan coordinator, Jihad Mughniyeh. The killings of the high- profile targets elicited the response of the chief of Iran’s Revolutionary Guards, Ali Jafaari, who vowed that his country would “fight to the end of the Zionist regime,” according to Reuters.

The high rank of the leaders targeted in the strike will make it difficult for both parties to restrain themselves from responding, said Yoram Schweitzer, a senior research fellow and the head of the program on terrorism at the Institute for National Security Studies in Israel and the former head of the Israeli Defense Forces’ Counter International Terror Section. However, neither Iran nor Hezbollah will follow through on their threats and “burn the ground under Israel.” “At this stage it’s not in the interest of Iran or Hezbollah to open a war,” he said. “They would not want to open a new front in Lebanon which may deteriorate into a very messy situation.”

Because Hezbollah, which is widely seen as Iran’s military proxy in the Levant, is already stretched thin supporting the embattled regime of Syrian President Bashar Assad amid Syria’s ongoing civil war, sustaining a second front would be near impossible for the militant group. “Even for countries that are much stronger than Hezbollah, it is difficult to fight a war on two fronts,” said Schweitzer. “Both Iran and Hezbollah are heavily invested in trying to save Assad’s regime so they don’t need another enemy on the agenda.”

The militant organization may have a strong record of retaliation against Israel in cases like these, but the Syrian conflict has transformed the group and made it more cautious, said Bilal Saab, a senior fellow for Middle East security at the Brent Scowcroft Center on International Security at the Atlantic Council in Washington, D.C. “This is a new Hezbollah; ever since [its] entry into Syria, the organization has been overstretched militarily and on the defensive politically,” he said.

According to Saab, the heated rhetoric by Hezbollah operatives in the wake of the attack is more geared toward audiences at home than Israel. Instead, the organization is keenly aware of the consequences of an irresponsible military response to the strike, something that would be “absolutely destructive” for the group and its Shiite constituency in Lebanon, he said.

A monthlong war that erupted between the militant organization and Israel in 2006 resulted in at least 1,109 mainly civilian deaths in Lebanon, along with widespread destruction of homes and villages across the country, according to Human Rights Watch. The memory of that war is still fresh in the minds of Hezbollah’s leadership, alongside practical considerations of its capabilities given the Syrian conflict, said Saab.

This point was underscored by the comments of Hezbollah MP Kamal Rifai on Tuesday, who said that the militant organization’s response to the strike would be harsh but measured. “Hezbollah and its leadership have the smarts, the resources and the capability to respond accordingly, after taking into consideration the political-security situation of Lebanon and the region at large,” he said, according to Haaretz.

The most likely scenario for a response by the group would be an attack outside of the region, rather than a provocation of hostilities on the border, said Brent E. Sasley, an associate professor of political science at the University of Texas at Arlington. Hezbollah is thought to have utilized this tactic in the past, targeting Israeli and Jewish interests in countries outside the Middle East, including Bulgaria, where a July 2012 bus bombing in the Black Sea resort of Burgas resulted in the killing of six people, including five Israelis.

“Israel is not going to go to war with Hezbollah over a terrorist attack outside of the country,” said Sasley. “If Hezbollah did something outside of the region, it’s harder… to respond to an attack like that” especially as the group tries to cover its tracks when they’re involved in such cases, he said, though he noted that a major attack could still trigger Israeli retaliation.

Hezbollah’s backers in Tehran are in a similar situation in that they are unlikely to want to back down following the killing of Allahdadi, but are also not interested in igniting a tit-for-tat conflict with Israel at the moment, especially in the midst of Iran’s ongoing nuclear negotiations with world powers. While Iran might be able to distance itself from attacks committed against Israeli interests abroad, a larger retaliation against Israel would make it difficult for the United States and other international players to proceed with the talks, said Sasley. “The question is,” he said, “What’s more important to Iran, responding and shoring up their position in the region or the nuclear talks?”