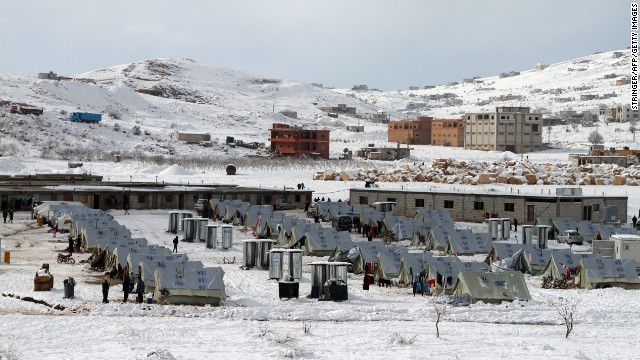 About 1.2 million refugees from the civil war in Syria are believed to be living in Lebanon. Many of them are surviving in flimsy camps amid freezing temperatures in the Bekaa Valley. Meanwhile Lebanese patience with the visitors is wearing thin.

The small stove at the centre of Um Abed’s tent burns rubbish that is collected from the street. Acrid smoke hangs in the air. It stings your throat. It burns your eyes.

Her three-year-old daughter, Mariam, has developed asthma from the poisonous fumes. But this, Um Abed knows, this was the best chance she had of protecting her from the sub-zero temperatures outside.

In this makeshift camp in Lebanon’s Bekaa Valley – and in thousands of others like it in the country – Syrian refugees are facing the same miserable conditions.

The shelters are pitiful. They are made of tarpaulin, plywood and potato sacks – no match for the most violent storm to hit the region for two decades.

Some of the structures collapsed in the blizzard. Icy water seeps through the sides of others, soaking blankets and mattresses. Um Abed uses cooking pots to catch drops from the leaking roof.

Efforts by aid agencies mean that few have died this winter. But as the snow persists, people are getting ill.

Close to Um Abed’s home, parents queue with their sick children outside a tent where Melhem Harmoush, a visiting doctor from a Lebanese charity is holding an impromptu clinic.

Mothers hold their infants close as they wait, trying to protect them from the bitter wind. A father comforts his daughter – no older than five, her hair in plaits – through a violent coughing fit.

Few can afford the proper clothing to withstand the cold. Most wear the clothes in which they left Syria.

Women who fled in the summer shiver in thin gowns and sandals. Some of the children have only socks on their feet. Others tread barefoot through the slush and mud.

Dr Harmoush works fast. A quick listen through the stethoscope, a look inside the mouth, a hand across the forehead to gauge temperature.

The storm is only the latest burden on the Syrian refugees, whose country is locked in a seemingly endless war.

Even though the number of people fleeing the conflict is still growing, the level of aid has been reduced dramatically.

United Nations food vouchers have been cut by a third to just £12.50 ($19) per person per week. So Um Abed can no longer afford drinking water. Buckets hang from the roof of the shelter to collect rain.

To make ends meet the whole family has to work – Um Abed and her husband cannot find well-paid jobs. The children are sent to toil for long hours in the surrounding fields. The best they can hope to earn is £2.50 ($4) per day.

It’s difficult work, Um Abed tells me, but if they don’t do it, the boss of the settlement will evict them from their shelter for failing to meet their rent.

At the beginning of the war, Lebanese communities mostly welcomed Syrian refugees. Some even offered rooms in their homes for free. But as the influx continues, and the conflict prepares to enter its fifth year, that hospitality has soured into resentment.

In the Bekaa Valley and other parts of Lebanon, residents have burned refugee shelters to the ground. Gunmen have fired on settlements, blindly spraying bullets through the walls of canvas tents.

In some areas curfews for Syrians are being enforced – no-one goes out after dark. Trigger-happy local vigilantes patrol the streets.

In one village in the north of Lebanon, a Sunni religious leader has called on 1,200 refugees to leave the area.

Lebanese society mirrors the religious and political divisions that have grown so toxic in the Syrian war, and there is also a fear that the conflict may spill over into Lebanon.

But ultimately much of the tension is down to money.

The rapid population increase in this tiny country where one in three is now a Syrian, has placed an unbearable strain on the economy.

Rents and unemployment are high, and salaries have been slashed.

In the small town of Meshaa in the north of the country, as many as a third of the local Lebanese employees have lost their jobs since the start of the Syrian crisis.

Some of the residents are now poorer than the refugees they took in.

The grocery shop in Meshaa is bustling with Lebanese customers. But few can actually afford to pay. Instead of handing over cash at the till, many take their shopping on credit.

Amar, the shop owner, notes down their names, the amounts owing and date of purchase in a thick notebook where he lists his debts.

It is the third such book on his counter and it is almost full.

The Syrian customers exchange goods for UN vouchers but the Lebanese were not eligible for any aid.

“It’s a matter of humanitarian feeling,” says Amar. “If someone who lives near you, a neighbour, comes to the store asking for bread to feed his children, but can’t afford to pay, how can you refuse?”

“They pay me back when they can, but it is an impossible situation.”