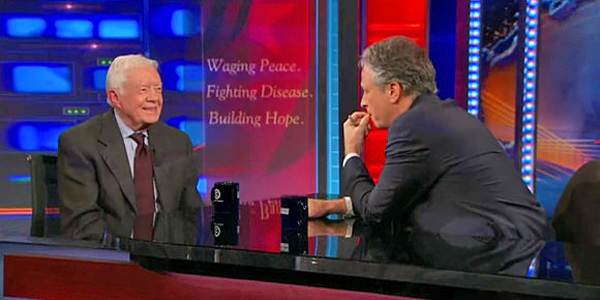 In a Monday night  interview on ‘The Daily Show’, former President Jimmy Carter asserted that the recent violence in France could be attributed to the failure to reach a solution to the Palestinian problem and the terror attacks are a reflection of and a reaction to how Arabs are treated in Israel.

Appearing on “The Daily Show” Monday, former US president, Jimmy Carter was asked by host Jon Stewart whether the violence  on the streets of Paris was fueled by something else other than Islamic extremism.

“Well, one of the origins for it is the Palestinian problem,” Carter replied. “And this aggravates people who are affiliated in any way with the Arab people who live in the West Bank and Gaza, what they are doing now is what’s being done to them. So I think that’s part of it.”

“But I think this is a new evolutionary development in terrorism, where people go into Syria, they get trained there, they have a passport from France, from Great Britain or from the United States,” he added. “They stay there for a few months and learn how to be a terrorist and then they come back through Turkey and you know they have been there and you know who they are. And I think this event in Paris is going to waken up the people in charge of security to watch those people more closely than they have in the past — and not single out all of the Muslims in the country.”

Carter did not believe the French could have prevented the terrorist attack on Charlie Hebdo last Wednesday.

“We didn’t do anything to prevent the 9/11 attacks on our country, not because we were a bad country but just because it was unanticipated,” Carter said. “I think the same thing happened to the French. I don’t think they deserve any condemnation or criticism. I think they did an excellent job in finding the perpetrators of this horrible crime. I’m sure they’ll be much more vigilant in the future, as we have become since 9/11.”

Carter said he believes similar attacks will also be hard to stop, and said the war in Syria has become a new training ground for another generation of terrorists.

“I don’t think we’ll ever be able totally to eradicate the problem,” he said, though he also pointed out that security and prevention measures will be “much more effective” in the future.

Carter who also   blamed unemployment in Islamic countries for the terror attack said .“I hope in the future, though, that we can have, you know, full employment for everybody in the country, even the young men who can be most easily seduced into this horrible commitment.”

Carter, who wrote a book called “Palestine: Peace not Apartheid,” told Stewart that it was “disheartening” to think about how much time has elapsed since the Oslo Accords — signed in 1993 — without a peace agreement between Israel and the Palestinians.

“I still have hope for peace in the Middle East, but a distant hope,” he said.

Carter said the United States must be “in the forefront of demanding that the Palestinians and the Israelis come together and accept a reasonable solution to the problem.”

His formula,he told Stewart  is for Israel to give up the West Bank, Gaza and  East Jerusalem and for the Palestinians to promise Israel security.