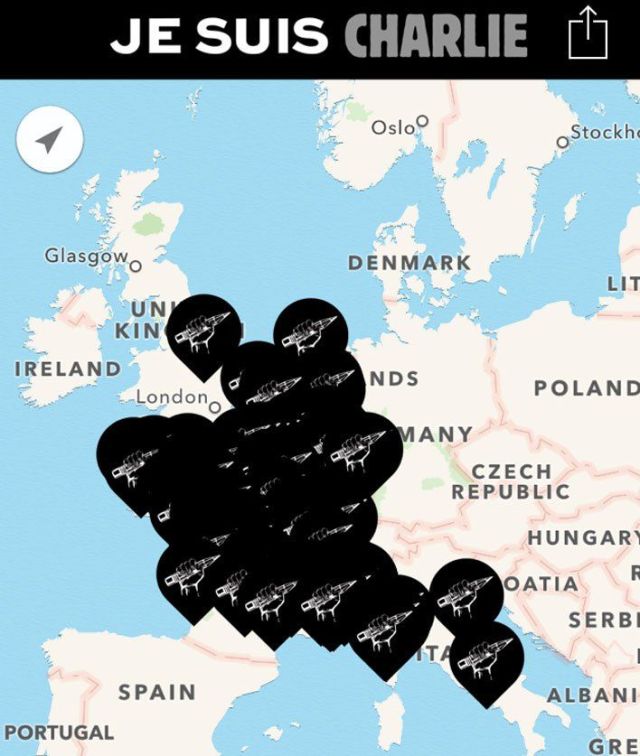 Apple has been feeling the #jesuischarlie solidarity lately. After publicly supporting the movement protesting the terrorist attacks on the Charlie Hebdo offices last, week, Apple has since approved a ‘Je Suis Charlie’ app for sale on the App Store, just one hour after the developers emailed CEO Tim Cook.

The “Je Suis Charlie” app allows users to add their location to a large geo-map, in order to declare their support for freedom of expression. The app protests the killings of several French cartoonists last week by Islamic extremists, who stormed the offices of the Charlie Hebdo humor magazine in retaliation for several cartoons of Muhammed.

“Because ‘I’m Charlie’ became the symbol of freedom of expression, whatever your beliefs, your country and your opinions, download the app ‘I’m CHARLIE’ and simply mark your location on the world map,” reads the app’s description in the app store.

As you may know, it normally takes at least 10 days for an app to be approved by the App Store review team when it is first submitted. But the developers of the app wanted it available for yesterday’s massive rally in downtown Paris. So they messaged Tim Cook directly about their app.

Needless to say, Cook used his power to get the app to the top of the queue. And as the Canadian Global News note, it made a difference: you can’t even see France in the app right now, because so many people are showing their support.