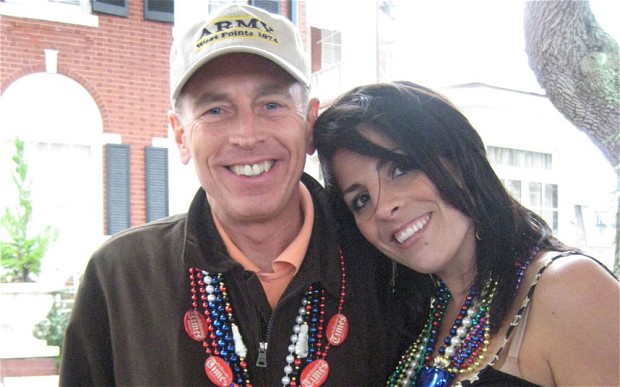 David Petraeus, former director of the CIA, is seen with Florida socialite Jill Kelley. Gilberte “Jill” Khawam Kelley is a Lebanese-American socialite and advocate that previously served as the honorary ambassador to the U.S. Central Command Coalition, and honorary consul to the Republic of Korea
Share: 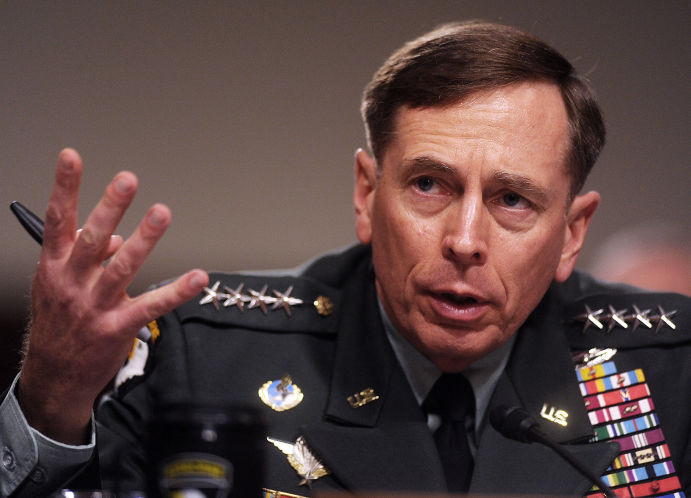 The FBI and Justice Department prosecutors have recommended bringing felony charges against retired Gen. David Petraeus for providing classified information to a woman with whom he was having an affair while he was director of the CIA, officials said. That leaves Attorney General Eric Holder to decide whether to seek an indictment that could send the pre-eminent military officer of his generation to prison.

The Justice Department investigation stems from Petraeus’ relationship with Paula Broadwell, an Army Reserve officer who was writing his biography, and focuses on whether he gave her access to his CIA email account and other highly classified information. FBI agents discovered classified documents on her computer after Petraeus resigned from the CIA in 2012, when the affair became public.

He has said he never provided classified information to Broadwell and has indicated to the Justice Department that he has no interest in a plea deal that would spare him an embarrassing trial. An attorney for Petraeus, Robert B. Barnett, said Friday that he had no comment.
Holder was expected to decide by the end of 2014 whether to bring charges against Petraeus, but he has not indicated how he plans to proceed. The delay has frustrated some Justice Department and FBI officials and investigators who have questioned whether Petraeus has received special treatment at a time when Holder has led an unprecedented crackdown on government officials who reveal secrets to journalists.

The protracted process has also frustrated Petraeus’ friends and political allies, who say it is unfair to keep the matter hanging over his head. Sen. John McCain, R-Ariz., wrote to Holder last month that the investigation had deprived the nation of wisdom from one of its most experienced experts.

“At this critical moment in our nation’s security,” he wrote, “Congress and the American people cannot afford to have his voice silenced or curtailed by the shadow of a long-running, unresolved investigation marked by leaks from anonymous sources.”

Since his resignation from the CIA on Nov. 10, 2012, Petraeus has divided his time between teaching, making lucrative speeches and working as a partner in one of the world’s largest private-equity firms, Kohlberg Kravis Roberts.

Holder has said little publicly about the investigation. FBI director James Comey, asked by reporters in December why it was taking so long, said, “I can’t say. I mean, I guess I could say, but I won’t say.”

Marc Raimondi, a Justice Department spokesman, declined to comment on the investigation. Several officials who discussed it did so on the condition of anonymity because they were not authorized to speak publicly.

At a news conference shortly after Petraeus resigned, President Barack Obama said he had no evidence that Petraeus had disclosed classified information “that in any way would have had a negative impact on our national security.”

“We are safer because of the work that Dave Petraeus has done,” Obama said, referring to his career in government. “And my main hope right now is — is that he and his family are able to move on and that this ends up being a single side note on what has otherwise been an extraordinary career.”

But investigators concluded that, whether the disclosure harmed national security, it amounted to a significant security breach in the office of one of the nation’s most trusted intelligence leaders. They recommended Petraeus face charges, saying lower-ranking officials had been prosecuted for far less.

Federal agents stumbled onto the affair after Jill Kelley, a friend of Petraeus, complained to the FBI that she had received anonymous threatening emails about her relationship with Petraeus. Kelley, a Tampa resident, met Petraeus through her role as a civilian liaison who put on social events for the military at MacDill and developed a friendship with Petraeus and his wife, Holly.

Petraeus is said to have begun the affair with Broadwell in 2011, soon after taking the job at the CIA and while she was interviewing him for her book, All In: The Education of General David Petraeus.

Petraeus resigned from the CIA on Nov. 10, 2012, three days after Obama was re-elected. In a brief statement, Petraeus admitted the affair, saying that “after being married for over 37 years, I showed extremely poor judgment.”

“Such behavior is unacceptable, both as a husband and as the leader of an organization such as ours,” Petraeus said, referring to the CIA. “This afternoon, the president graciously accepted my resignation.”

Petraeus, a graduate of West Point, took command of U.S. forces in Iraq in 2007, one of the lowest points in the war. Al-Qaida controlled large parts of the country, and dozens of U.S. soldiers were dying each month. Petraeus directed the “surge” of U.S. forces that resulted in the United States slowly taking control of Iraq and putting America on the path to withdrawing its troops under Obama.

In 2010, Obama chose Petraeus to lead U.S. forces in Afghanistan, where the Taliban were gaining territory. Petraeus had some success — although not nearly as much as he had in Iraq.

Attorney General Eric Holder says the leadership of the Justice Department will decide whether prosecutors will pursue criminal charges against retired Gen. David Petraeus, but wouldn’t say whether that would be him or his successor.

“I would expect that — to the extent that there is a matter of this magnitude — that would be decided at the highest levels of the Justice Department,” Holder told CBS’ Face The Nation on Sunday.

Holder is due to retire soon; President Obama has nominated New York-based U.S. Attorney Loretta Lynch to be the new attorney general, but it’s not known when the Senate might vote on her confirmation.

Holder, who is in Paris for an anti-terrorism rally in the wake of last week’s attack, did a round of Sunday show interviews. He declined to discuss the Petraeus case in detail, including the timing of any decision to move forward or not.