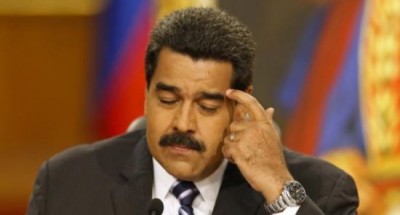 Nicolas Maduro said on Sunday he will visit China and several unspecified OPEC countries during a week-long tour meant to improve the South American nation’s finances, which have been weakened by tumbling crude prices.

“I’m leaving today for an international tour … a very important tour to take on new projects, given the circumstances of falling income that our country faces,” Maduro said during a televised broadcast.

His first stop will be China, which has become Venezuela’s principal financier through oil-for-loan agreements in which Venezuela receives cash up front in exchange for future deliveries of crude and fuel.

“Also, I’m going to visit other OPEC countries to continue high-level efforts (to create) a strategy for a recovery of oil prices, a strengthening of OPEC,” Maduro said. He provided no other details.

Venezuela’s economy contracted during the first three quarters of 2014, and its international reserves have deteriorated sharply amid tumbling oil prices.

The decline has spurred concerns that Venezuela may default on its foreign bonds, which in turn has pushed its bond yields to the highest of any emerging market nation.

Maduro denies the country will default. But he says Venezuela’s government needs financing in 2015 and says borrowing on international markets is prohibitively expensive.