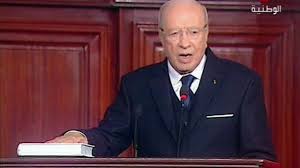 After taking his oath of office, he told parliament he would be “the president of all Tunisians”.

Mr Essebsi was speaker of parliament under President Zine al-Abidine Ben Ali, who was ousted in 2011 in the first “Arab Spring” uprising.

Tunisia is the only Arab country to have moved from authoritarian rule to democracy since a wave of popular uprisings spread across the region.

On Monday, electoral authorities confirmed that Mr Essebsi had won a run-off vote against Mr Marzouki.

“There is no future for Tunisia without consensus among political parties and members of civil society,” Mr Essebsi said in his inaugural speech.

His critics say his election victory marks the return of the former establishment, pointing out that he served under President Ben Ali, and was also interior minister under the country’s first president Habib Bourguiba.