2014 : The deadliest year for migrants 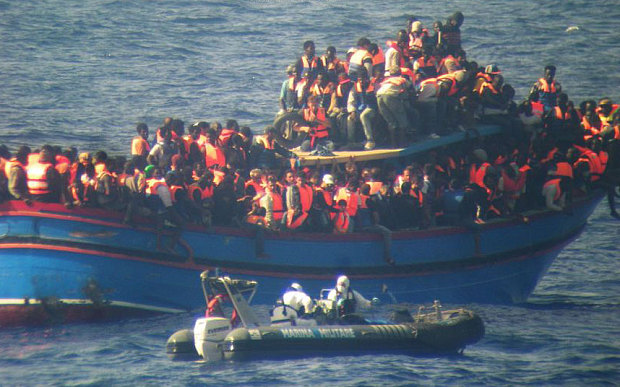 A crowded boat of immigrants during one of the rescue operations off the coast of Sicily in this picture, released by the Italian navy on June 30, 2014 Photo: AFP/GETTY IMAGES
Share:

By: Raziye Akkoc
2014 is the deadliest year for migrants, according to the International Organisation for Migration, with 4,868 people killed in the pursuit of a better life compared to 2,400 deaths in 2013.

As a result, it is not surprising that the number dead or missing in the Mediterranean Sea is more than the numbers for 2011, 2012 and 2013 added up together.

How many people leave their home country and take to the seas for another?

The UNHCR said “at least 348,000” have risked their life crossing seas fleeing violence, persecution and poverty since January.

Usually the figures are driven by migration but the UNHCR said “in 2014 the number of asylum seekers involved has grown”.

Since the start of the year, 207,000 people have crossed the Mediterranean, which the UN notes, is “almost three times the previous known high of 70,000 in 2011 when the Libyan civil war was in full swing”.

The UNHCR also said it was the first time “people from refugee producing countries (mainly Syria and Eritrea) have in 2014 become a major component in this tragic flow, accounting for almost 50 per cent of the total”.

Why has there been such an increase?

According to the UNHCR, Europe is seeing the largest number of sea arrivals mainly due to conflicts in Libya, Ukraine, Syria and Iraq. Carlotta Sami, of the UNHCR, said the rapid rise in arrivals is linked to the rise in “forced displacement” of more than 51m people.

Ms Carlotta said: “The link between the rise in forced displacement to over 51 million people and the increased number of people attempting to find safety in Europe is undeniable and the majority of those rescue at sea and arriving in Europe are fleeing war, violence and persecution.

Another reason for the increase cited by the UNHCR was the crisis unfolding in Syria, Iraq, Central African Republic, South Sudan and “further afield”. A UNHCR spokesman said the high numbers in 2011 related to “when the Arab Spring turmoil was in full swing”.

What are the sea routes migrants use?

It is not just the Mediterranean Sea where migrants risk their lives, the UN notes three other major sea routes and how many individuals have used the crossings in 2014.

QuoteIn the Horn of Africa region 82,680 people crossed the Gulf of Aden and Red Sea between January 1 and the end of November en route mainly from Ethiopia and Somalia to Yemen or onwards to Saudi Arabia and the countries of the Persian Gulf.

In south east Asia, it is estimated that 54,000 people have undertaken sea crossings so far in 2014, most of them departing from Bangladesh or Myanmar and heading to Thailand, Malaysia, or Indonesia.

In the Caribbean, at least 4,775 people are known to have taken to boats between January 1 and December 1 this year, hoping to flee poverty or in search of asylum.”

The chart below shows where the most arrivals to Europe come from and again shows a dip in 2012 before an increase in 2013. Italy is the country where the most migrants – from North Africa, Turkey and Greece – come to Europe.

How many migrants die trying to cross the Mediterranean and worldwide? 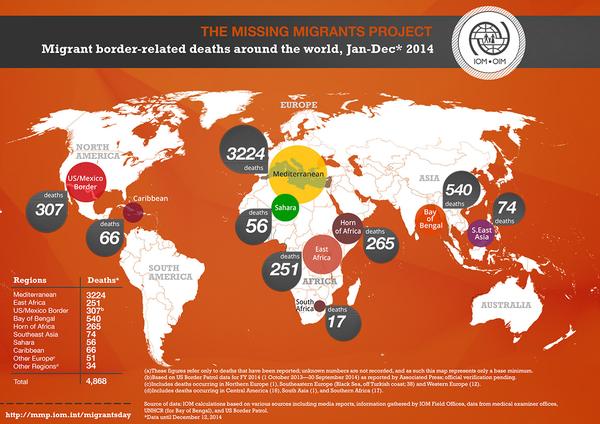 In 2014, 3,400 people attempting to enter Europe via Italy and other European countries died or went missing in the Mediterranean Sea. As previously mentioned, this is more than double the figure in 2011 and makes up the majority of the worldwide figure of 4,272 figure, making it the “deadliest” route, according to the UNHCR.

It is important to note this data is based on estimates and the real figure could be higher.

In south east Asia, 540 people have died attempting to cross the Bay of Bengal, while 242 died trying to cross the Red Sea and Gulf Aden. In the Caribbean, the UNHCR said the number reported missing or dead is 71.

How does the UNHCR believe the deaths can be avoided?

António Guterres, UN High Commissioner for Refugees, said the problem would only be solved if the real root causes behind the increased migration numbers were addressed.

“This means looking at why people are fleeing, what prevents them from seeking asylum by safer means, and what can be done to crack down on the criminal networks who prosper from this, while at the same time protecting their victims,” he explained.

The commissioner also attacked governments for considering “keeping foreigners out as being a higher priority than upholding asylum”.

The UNHCR spokesman told the Telegraph that the issue can only be tackled with closer cooperation between states of origin, transit and destination.

“Critical to reducing loss of life at sea [is] addressing the drivers of dangerous sea journeys, as well as ensuring that responses by states upon arrival and disembarkation uphold human rights and dignity, and address[ing] specific needs for protection of migrants, asylum-seekers and refugees,” he added.