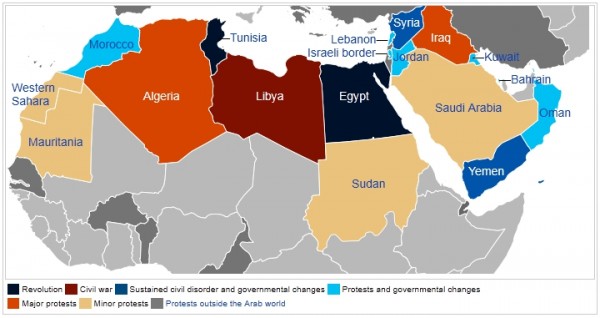 4 years after triggering the Arab Spring, Tunisians appear to have concluded their democratic transition with the election of a president, while other countries are still gripped by violence and repression.

Here is a recap of where things stand now in the Middle East and North Africa:

TUNISIA
On December 17, 2010, a young street vendor frustrated by police harassment set himself ablaze in the town of Sidi Bouzid and later died in hospital. That triggered protests against poverty and unemployment. On January 14, 2011, popular pressure forced longtime president Zine El Abidine Ben Ali to flee the country.

The year 2013 was marked by political crises and violence blamed on jihadists, but the country adopted a new constitution in January 2014.

In October, legislative elections were won by Nidaa Tounes, an anti-Islamist party, which was tailed by Islamists from the Ennahda party.

In November, the first round of a presidential election were deemed free and fair by international observers, and a run-off took place last Sunday.

SYRIA
Syria has been devastated by almost four years of civil war that has killed more than 200,000 people, forced half of the country’s population to flee their homes and destroyed much of the nation’s infrastructure.

For more than a year, lightly armed rebel groups have been on the defensive, while Islamic militias such as the Al-Nusra Front, an Al-Qaeda affiliate, and the Islamic State group have gained ground in fighting against them and forces loyal to President Bashar al-Assad.

The country is now essentially splintered into zones controlled by either the government, Al-Nusra or IS.

Since September 2014, the United States and allies have carried out air strikes against IS, which they accuse of using brutal methods to maintain control.

EGYPT
After a popular revolt that lasted 18 days and left almost 850 people dead, Hosni Mubarak stepped down from the presidency on February 11, 2011 after almost three decades in power, handing power to the army.

In June 2012, Islamist Mohamed Morsi, backed by the Muslim Brotherhood, became the first civilian and freely elected head of state.

But the year that followed was marked by crises and political dissent, and Morsi was ousted by the armed forces, led by Abdel Fattah al-Sissi, on February 11, 2011.

More than 1,400 people, mainly Morsi supporters, have since been killed in street clashes, and security forces have made 15,000 arrests among the Muslim Brotherhood ranks, including the former president and most of the group’s key leaders. Hundreds have been condemned to death, and Morsi is on trial for crimes that could bring the same fate.

In June 2014, Sissi won a presidential election, while Mubarak has been exonerated in large part of the most serious charges brought against him.

LIBYA
Since Moamer Kadhafi’s regime collapsed in October 2011, authorities in Libya have struggled to maintain order.

More than three years later, Libya remains awash with weapons and powerful militias, and has rival parliaments as well as governments.

In recent months, Islamist militias have seized the capital and second city Benghazi, and government forces have launched operations to retake them.

BAHRAIN
A majority Shiite protest movement that erupted on February 14, 2011 was put down a month later by the Sunni Al-Khalifa dynasty, but the small Gulf kingdom is still the scene of unrest.

The opposition, which wants a true constitutional monarchy, boycotted parliamentary elections in November 2014 after the government refused to budge on fundamental issues.

YEMEN
Long-time president Ali Abdullah Saleh stepped down in February 2012 in a deal brokered by the United Nations and Gulf Cooperation Council after a year-long popular uprising, but remains a powerful political force.

Yemen is still struggling to achieve stability, with Shiite militias having recently seized the capital and other parts of the country, putting them at loggerheads with Sunni tribesmen and Al-Qaeda.