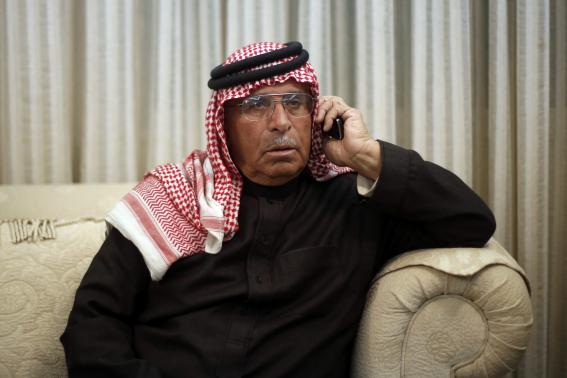 Safi al-Kasaesbeh, father of Jordanian pilot Muath, who was captured by Islamic State after his plane came down near Raqqa in Syria on Wednesday, speaks on a telephone as he follows the news of his son in the house of a relative in Amman December 25, 2014. CREDIT: REUTERS/MUHAMMAD HAMED
Share:

The father of a Jordanian pilot captured by Islamic State fighters after his plane crashed in Syria said he did not consider his son a hostage and called on his captors to treat him as a “guest”.

Jordan is one of several Arab countries participating in the U.S.-led military mission to bomb fighters from the Islamist group, which holds territory in both Syria and Iraq.

First Lieutenant Muath al-Kasaesbeh, 27, was captured after his jet crashed in northeast Syria on Wednesday during a bombing mission against the militants. The U.S. military, which commands the operation, said enemy fire was not the cause of the crash.

Kasaesbeh, who comes from a prominent Jordanian Sunni Muslim family, is the first pilot from the international coalition known to have been captured by Islamic State.

The Sunni Muslim jihadist group has a history of killing enemy soldiers that it captures on the battlefield and beheading Western civilians that it takes hostage. Many of the captives it has killed are Shi’ites or non-Muslims, but the group has also executed Sunnis for fighting alongside its enemies.

His family has pleaded for mercy.

“I do not want to describe him as a hostage. I call him a guest,” his father, Saif al-Kasaesbeh, told Reuters Television.

“He is a guest among brothers of ours in Syria Islamic State. I ask them – by the name of God and with the dignity of the prophet Mohammed, peace be upon him – to receive him as a guest of his hosts and treat him well,” he said.