Jordan confirms one of its pilots was captured by ISIS militants in Syria: Updates 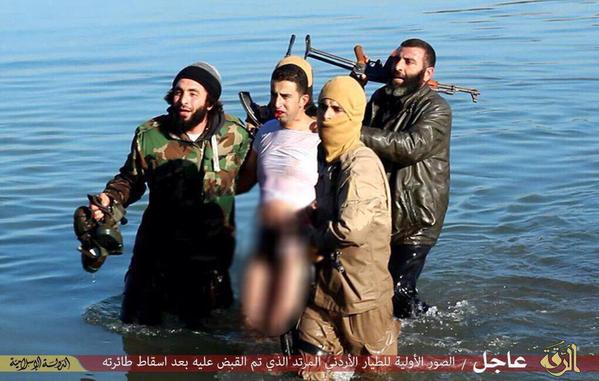 The Jordanian military has confirmed one of its pilots has been captured by Isis militants after a warplane crashed near Raqqa, Syria.

Earlier, the jihadist group released pictures of the pilot being taken from a lake surrounded by militants, and his photo-ID, which identifies him as 26-year-old Jordanian Lieutenant Maaz Yusuf Al-Kasasbeh.

His father, Yusuf al-Kasasbeh, said the family had been informed of Lt Al-Kasasbeh’s capture by the head of the Jordanian air force.

He appealed to Isis leaders: May Allah plant mercy in your hearts and may you release my son, reports Jordanian newspaper Saraya.

Isis claims to have downed the plane using a heat-seeking missile.

The Syrian Observatory For Human Rights said in a statement it had been informed by activists that the plane had been shot down.

Iraqi researcher and expert on the Islamic State, Hisham al-Hashemi, told the Washington Post the group obtained several several dozen shoulder-fired missiles from the Tabqa airbase near Raqqa after seizing the compound from the Iraqi military in the summer.

It is the first plane from the US-led coalition to be shot down since it began air strikes against Isis positions in Syria in September.

Update: More images posted on the capture of  Jordanian  pilot Lieutenant Maaz Yusuf Al-Kasasbeh.. According to the ID his full name is Mu’ath Safi Yousef al-Kaseasbeh

Kasasbeh has been a pilot in the air force for six years and was married in July.

In Washington, a Pentagon official said they are aware of the claims being made over social media that a pilot has been shot down, but they could not confirm the report at this time.

The official said any further questions about the alleged capture should be referred to the government of Jordan. He spoke on the condition of anonymity because he was not authorized to discuss the reports by name.

The pilot’s capture raises a nightmare scenario for Jordan, which has been sharply criticized by militant sympathizers for its participation. ISIS in the past has beheaded dozens of Syrian soldiers it captured in operations around the country. The group has also beheaded three Americans and two Britons.