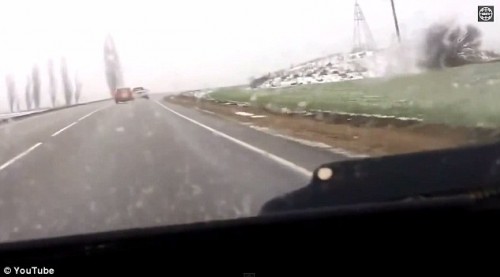 A hair-raising video has emerged that a car full of masked robbers exploding moments after they raided a church in Russia – and witnesses insist they were hit by lightning.

The dash cam footage uploaded by YouTube user World News TV, shows a vehicle speeding along with a police siren sounding in the background.

All of a sudden the car bursts into flames and explodes, sending debris all over the road.

According to a caption accompanying the video, everyone in the runaway car died as a result of the electrical bolt.

It is not known how many passengers were traveling at the time.

It’s also not clear who made the video or just how real it is.

The thieves had reportedly robbed a church in the city of St Petersburg.

To date the video has been watched more than 90,000 times. So even though it may not be real, it certainly has legs.

Many viewers though have deemed it an example of ‘divine intervention’.

According to experts, the chances of getting killed by lightning are around 300,000 to one.