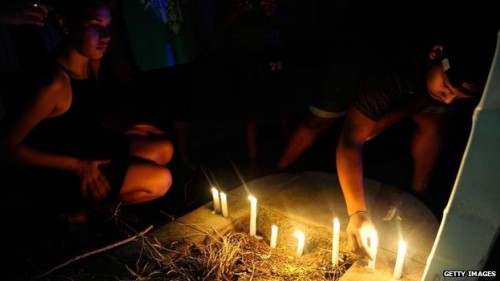 A candlelit vigil was held in Cairns on Friday evening
Share:
The mother of seven of eight children found dead in a home in Cairns, Australia, has been arrested on suspicion of murder.

Police said the woman, aged 37, was lucid and talking to investigators. She has not been charged.

She was found at the property, suffering stab wounds, alongside the bodies of the eight children.

They were aged 18 months to 14 years. Police have not said how they died. The eighth child was her niece.

Confirming the arrest, Cairns Detective Inspector Bruno Asnicar said: “The 37-year-old mother of several of the children involved in this incident has been arrested for murder overnight and is currently under police guard at the Cairns Base Hospital.”

“At this stage we’re not looking for anybody else – we’re comfortable that the community at large is safe,” he added.

‘Unspeakable crime’
A coroner is due to conduct post mortems on the children to determine the cause of death.

Police found a number of weapons at the scene , including knives, which are being examined.

The woman’s name has not been released. Her age was first given as 34 but has since been corrected to 37.

The bodies were reportedly discovered by the mother’s 20-year-old son arriving at the home on Friday morning.

Police have dismissed reports the family had been investigated by social services saying it was “not a problem house”.

A candlelight vigil and church service were held on Friday evening for the children.

Memorials have sprung up outside the home in the Manoora district of Cairns.

Australian Prime Minister Tony Abbott said in a statement it was an “unspeakable crime”.

These were “trying days for our country”, he added.

The deaths come just days after the siege of a cafe in Sydney which ended with the gunman and two hostages dead.