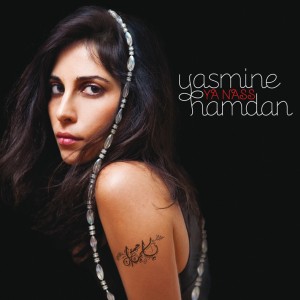 In Jim Jarmusch’s wry vampire comedy ‘Only Lovers Left Alive’ there is a scene close to the end of the movie, in which the immortal, bloodsucking lovers Adam (Tom Hiddleston) and Eve (Tilda Swinton) cease wandering the narrow alleyways of Tangier to marvel at a throaty, hypnotic performance of the love song “Hal,” by Lebanese singer-songwriter Yasmine Hamdan. Nodding at the swaying singer, clad in black leather trousers and an embroidered belt, her bare arms encased in bangles, Eve tells Adam “Her name is Yasmine. She’ll be famous one day.”

“I hope not,” the vampire replies. “She’s too good to be famous.”

The song which Hamdan wrote especially for the film, has been named one of the top tracks competing for Best Original Song at the 87th Academy Awards. The official video for the track, an extract from the film, features Hamdan swaying sensually as she sings the haunting number, her dark hair falling across her face. The performance takes place in a dimly lit café, where patrons stand silently under the ugly strip lights, as though mesmerized, and glasses of beer lie forgotten on tables.

Also an actress in ‘Only Lovers Left Alive’, Hamdan possesses an allure unlike any other performer, and it comes through clearly. Her singing is both casual and provocative, framed by provocative and commanding movements. The slow-paced, mournful track is about a pair of lovers who can’t find a way to be together. Though the separation is killing her, Hamdan sings, she is unable to find any solution.

Hamdan is one of the most groundbreaking musicians in the Middle East, praised by the New York Times as “Arabic Music’s Modern Voice” — thanks in part to her work in the electronic indie band Soapkills, the duo she founded with Zeid Hamdan in Beirut in the mid 90’s, which was the pioneering indie/electronic band to appear in the Middle East. In 2006, Yasmine moved to Paris and recorded under the Y.A.S. moniker, Arabology (2009), with Mirwais, a former member of the band Taxi Girl who also produced/cowrote Madonna’s ‘Music’ as well as the ‘American Life’ albums.

She then joined forces with Nouvelle Vague’s Marc Collin to produce her debut solo album, ‘Ya Nass’, which was released by Crammed Discs in Europe in May 2013 and in Japan and the USA last April. Her ‘Ya Nass Tour’ has brought her so far to major cities in Europe, the US and the Arab world.

Hamdan was born in 1976 and is married to the Palestinian film director and actor Elia Suleiman.

The nominations will be announced live on Jan. 15 and the Oscar ceremony is set to take place at the Dolby Theater at Hollywood and Highland Center in Hollywood on Feb. 22.

These three songs are stripped-down versions of pieces from Hamdan’s current album, Ya Nass. Amazingly, these hypnotic arrangements came together mere moments before her Tiny Desk Concert. Hamdan had only just met Gabriel Gordon when they traveled down together from New York that morning. They’re unrehearsed, and yet locked into a sound that’s calm, cool and universal.