France to speed up delivery of arms to the Lebanese Army, PM 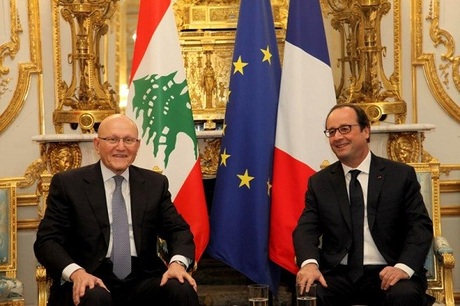 Lebanon Prime Minister Tammam Salam  who is in Paris on an official visit said Friday that French President Francois Hollande has ordered  the speeding  up of the  delivery of French arms to the Lebanese Army  which are being paid for by the 3 billion Dollar   Saudi Arabian  grant that was announced about a year ago .

Salam made the remark  after holding talks in Paris with Hollande.

He also pointed out that   France offered to  help Lebanon end the political deadlock that has left the country without a president for more than six months.

“Among the most important matters we discussed with France was the security file linked to the generous Saudi grant  to supply the Lebanese Army with the arms it needs,” Salam said at a news conference held at his temporary residence in Paris.

“Final touches have been put to the technical part [of the Saudi deal] and what remains is the final approval between Saudi Arabia and France. The arms delivery to Lebanon will happen in a swift manner,” Salam  added.

Salam said Hollande had issued the “necessary instructions to expedite the delivery of these arms, especially since the confrontation with terrorism is still ongoing.”

In a related development the Lebanese daily As Safir reported  that observers familiar with the negotiations of the arms deal with France  have  reported that the Lebanese Army has been stressing the importance of parts, maintenance and warrantee . France reportedly offered 5 year warrantee but Lebanon was able to get 5 years despite  the cost  which is  estimated to be about 1/6 of the grant . In other words Lebanon prefers to get less equipment but that will last longer .

According to As Safir report Saudi Arabia will be sending the first 20 %  ( $ 600 million)  of the grant amount to France as soon as Lebanese army finalizes the list of the equipment needed .

Most of the arms that will be supplied initially will be stock items that will be modified to meet the needs of the Lebanese army , but some equipment that will be specially made  such as the 4 military boats  for the Navy could take as long as three  years before it it is delivered .

First on the list of immediate delivery are 7 Gazelle attack  helicopters  equipped with  “Hot” missiles  and 7 Buma Gazelle helicopters to transport the troops.

The same sources told As Safir that the United States will soon be delivering to Lebanon under the additional 1 billion Dollar Saudi Arabian grant 12 attack Kiowa helicopters ,  2 modified Cessna planes to carry out reconnaissance missions   and 8 Tucano attack planes  for combat mission equipped with Hellfire” missiles and laser-guided bombs to destroy fortifications and armored vehicles.

The Head of ODAS ( the French company that will be supplying the arms to the Lebanese army)  Admiral Edouard Guillaud is  reportedly scheduled to arrive in Beirut on Monday to finalize the list of weapons and equipment needed by Lebanon ,  As Safir daily   added .

After  his Beirut stop, Guillaud is expected to travel to Saudi Arabia to deliver the list to the Saudi Government as stipulated in  the Saudi-French arms deal.

The transfer to France , of the  initial payment of  $600 million, should be made before the end of the year, added As Safir.