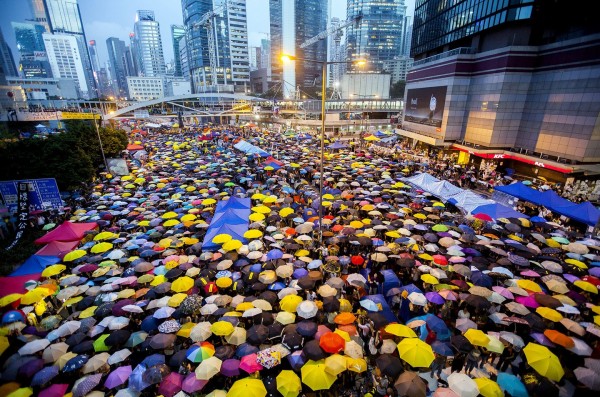 Pro-democracy protesters open their umbrellas for 87 seconds, marking the 87 rounds of tear gas that were fired by the Hong Kong police at unarmed student protesters in exactly the same location one month ago, at the Admiralty protest zone which has been newly dubbed ‘Umbrella Square’, Admiralty, Hong Kong on October 28, 2014.
Share:

Hong Kong police arrested pro-democracy activists and cleared most of the main protest site on Thursday, marking an end to more than two months of street demonstrations in the Chinese-controlled city, but many chanted: “We will be back”.

Most activists chose to leave the Admiralty site, next to the Central business area, peacefully, despite their demands for a free vote not being met. But the overall mood remained defiant.

Hong Kong Federation of Students leader Alex Chow said: “You might have the clearance today but people will come back on to the streets another day.”

Groups of up to four police arrested holdout protesters one by one, hours after workers used wire cutters to remove barricades and dismantle bamboo scaffolding.

Martin Lee, one of the founders of the main opposition Democratic Party, student leader Nathan Law, media mogul Jimmy Lai and legislators were among those arrested.

Lai said 75 days of protests would never have been enough to see the demands met.

“We are not so naive,” he told CNN before he was arrested. “We know there will be many battles before we win the war.”

The mainly peaceful protests have represented one of the most serious challenges to China’s authority since the 1989 pro-democracy demonstrations and bloody crackdown in and around Beijing’s Tiananmen Square.

Going forward, protest leaders have said they will consider other forms of civil disobedience, given Beijing’s continued refusal to grant any concessions.

“Blocking government may be even more powerful than blocking roads,” Benny Tai, one of the leaders of the movement, has said.

“Refusal to pay taxes, delaying rent payments … and filibustering in the Legislative Council, along with other acts of non-cooperation, could make governing more inconvenient.”

At the protest site, authorities used around 20 large trucks with cranes to remove mountains of rubbish. By late evening, traffic had resumed along two lanes of the previously blocked highway.

Hundreds of police swept through other parts of Admiralty, checking tents before dragging them away along with metal barriers, plastic sheets and umbrellas, which activists had used during clashes to guard against pepper spray and baton blows.

A decapitated cardboard cutout of Chinese President Xi Jinping stood in front of a police line.

“The movement has been surreal. No one knew it could last more than two months … in a place where time and money are most important,” said protester Javis Luk, 27.

There was little resistance as protesters packed up pillows, blankets and other belongings from inside tents pitched on some of the world’s most expensive real estate and left the site.

“This is the last warning for CY Leung! Show your face, CY Leung,” they shouted.

All of the hundreds of tents that had dotted the eight-lane highway that connects some of the former British colony’s most important financial and commercial districts had been removed by the evening and just a few dozen protesters remained.

Hong Kong returned to Chinese rule in 1997 under a “one country, two systems” formula that gives the city more autonomy and freedom than the mainland and a goal of universal suffrage.

The protesters are demanding open nominations in the city’s next election for chief executive in 2017. Beijing has said it will allow a 2017 vote but only between pre-screened candidates.

Despite the clearance, the Occupy movement has been a social watershed, with people pushing back against increasing control and standing up to Beijing to preserve democracy and freedoms largely denied on the mainland.

For many, it was a tearful farewell to the site where thousands had gathered in recent weeks and many have called home during the occupation.

“The movement has been an awakening process for Hong Kong. People who weren’t interested in politics before are now and aren’t afraid to get arrested, especially the young people,” said Labour Party lawmaker Lee Cheuk-yan.

The clearance at Admiralty came more than two weeks after authorities removed barricades from a protest site in the working-class district of Mong Kok, across the harbor, sparking several nights of running battles between demonstrators and police. A handful of protesters remained in the shopping district of Causeway Bay.

The protests drew well over 100,000 at their peak as students vented their anger at Beijing’s refusal to budge on electoral reforms.

A large yellow banner bearing an umbrella and the words “We’ll be back” was draped in the center of the highway where protesters had camped out, with similar messages scrawled on roads and posted on tents.

Next to the People’s Liberation Army base, a huge orange banner erected across barricades read: “It’s just the beginning.”