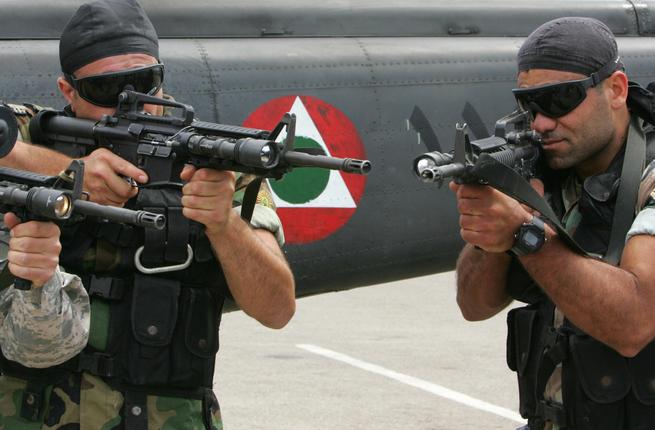 The Lebanese army has been engaged in fierce clashes with militants along border with Syria
Share:
Israel’s military reveald  on Wednesday that  it was contemplating  the possibility of cooperating with the Lebanese army to counter Islamist extremist  militants, even though the two countries remain technically at war.

Any public coordination was almost certain to be rejected in Beirut, where dealing with neighboring Israel is considered a crime.

But a senior Israeli military officer noted that the US-led coalition fighting Islamic State jihadis in Iraq and Syria had brought together disparate forces, and said Israel might similarly expand on its current security ties with Egypt, Jordan and the Western-backed Palestinian Authority.

“If you all have a common enemy, it should be very easy to find common opportunities to try to fight it,” the officer, who spoke on condition of anonymity, told foreign reporters in a briefing.

“And I am looking and asking myself: Will the Lebanese Armed Forces play a positive or negative role?”

Asked if he was suggesting there could be cooperation, perhaps mediated, with Lebanon’s armed forces, he said “Yes”.

He declined to spell out whether contacts were under way, however: “I can’t be too specific about that. I have to be very cautious about it, so I won’t say any more than that.”

Lebanon has been battling Syrian Sunni radicals in areas adjacent to its border with Syria.

But the Iranian-backed armed Lebanese Shi’ite group Hezbollah, which fought a war with Israel as recently as 2006, could be a major obstacle to any cooperation.

Hezbollah is helping President Bashar al-Assad in the Syrian civil war. It says this has helped to keep the Sunni jihadists who make up a large part of the anti-Assad rebellion at bay, but critics say it has stoked sectarian tensions in Lebanon.