ISIS throws man off roof to his death for being gay 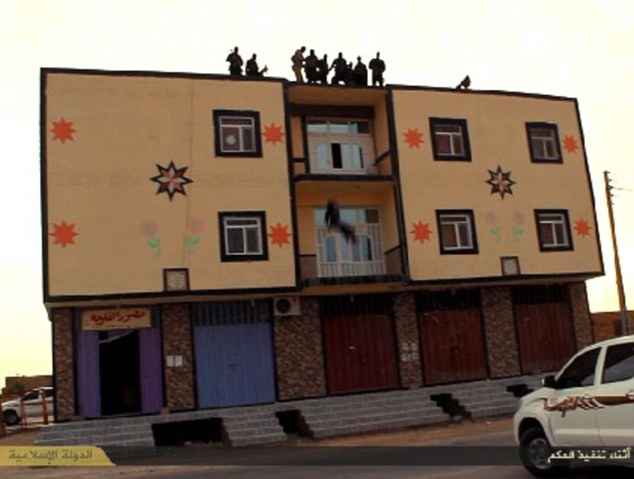 After dragging the man to the top of a building the mob threw him to his death after he was found guilty by an Islamic court of being gay
Share:

Chilling new images released by ISIS militants show a group of fighters throwing a man off the roof of a building for being gay – as others pictures emerge of bloodied ‘rapists’ being strung up in the streets of the same town.

Moments before he is flung to his death, a mob of at least eight men can be seen atop of the building that is believed to be somewhere in northern Iraq.

The images were posted on a jihadist website just hours after US senate report – described a ‘a stain’ on American values – revealed the sadistic abuse of CIA detainees in a network of secret prisons around the world.

Pictures have also been posted online that show three men, whose faces are bloodied and swollen, being tethered to a fence on a street corner. One man is blindfolded while the other two are gagged.

But while there has been soul searching in the US and demands in the UK for a full inquiry into the Blair government’s involvement in the CIA’s shameful torture programme, the ISIS fighters have tried to justify their brutal execution.

‘The Islamic court in Wilayet al-Furat decided that a man who has practised sodomy must be thrown off the highest point in the city,’ they said in a statement accompanying the images, adding that he would also be ‘stoned to death.’

Wilayet al-Furat refers to an area stretching across the Syrian-Iraqi frontier, where the Euphrates river flows from Syria into Iraq.

It is not known whether the man died instantly after being thrown off the roof.