Can Lebanon’s vineyards survive the spillover from Syria’s war 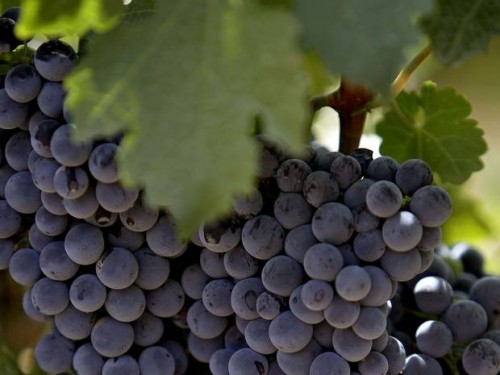 “The day that we are not allowed to make wine in Batroun is the day Lebanon is finished as a country,” says Hady Kahale of IXSIR winery, up the Mediterranean coast near Batroun, where Nissan-Renault CEO and business guru Carlos Ghosn is an investor, making wine from six different high-altitude vineyards of up to 1,800m….. “That would be the day I get a ticket out.”

By: ANDREW NEATHER
Listening to winemaker Fabrice Guiberteau enthuse about his terroir, you could almost be in Provence. Rows of golden-leaved vines stretch away in the autumn sun beneath a high ridge, cypress trees in the distance. The harvest for Guiberteau’s supple reds has gone well. But this isn’t Provence, it’s Lebanon’s Bekaa Valley. And as the sound of a muezzin drifts across the vines from the nearby village of Kefraya, we’re grateful that it isn’t gunfire from the Syrian border, 20km east. To add to the tensions of making wine in the Middle East, producers such as Château Kefraya now  face a nervous future in country buffeted by spillover from Syria’s civil war.

“With everything that’s going on, it’s always at the back of our minds: what if we couldn’t produce wine any more?” says George Sara of Château Ksara, up the road in Zahle.

Since it was carved out of greater Syria by the French in 1920, Lebanon has been a kaleidoscope of religious confessions – at that time, a majority of Maronite Christians with large Sunni and Shia minorities and smaller ones of Greek and Syrian Orthodox Christians, Druze, Armenians and Alawites (the Christian sects now make up a scant third of the total). Yet somehow the country worked: ever since independence in 1943, its parliament has operated via a confessional carve-up of power. The president has to be a Maronite, the prime minister a Sunni and the speaker a Shia, while numbers of seats are allocated for each group.

“Lebanon is a democracy because it is factional,” says Basem Shabb, a Protestant Christian MP with the Sunni-dominated Future Movement. “We are the only country in the world where there was a major Muslim-Christian conflict and there was  re-unification.”

Tensions were always close to the surface before the 1970s. Yet at Domaine des Tourelles, in Chtaura, in a storeroom piled with sacks of aniseed for arak liquor, black-and-white 1950s pictures of then-owner Pierre Brun show a lost world of smart, francophone Lebanon. It’s still a cross-cultural mix, Lebanese regularly jumbling Arabic, English and French: “Hi, keefak, ça va, habibi?” (“How’s it going, how are you, mate?”)

Lebanon’s wines might be seen as a symbol of that cosmopolitan, tolerant culture: an indicator of how far a multi-confessional Middle-Eastern nation can nurture such diversity, perhaps even multi-faith democracy itself. Democratic Lebanon is holding on, just – still the only Arab democracy of the region. But it is under greater pressure than at any time since the end of its bloody 15-year civil war in 1990. Last month, a postponed general election was put off again, until 2017.

Winemakers have always endured their share of Lebanon’s woes. Château Musar, the best-known producer, famously missed just two vintages during the civil war, despite its grapes coming from the Bekaa.

The Israelis occupied Château Kefraya in 1982, the Syrians Château Ksara in 1991-93. And in 2006, all Bekaa producers began their harvests days after the Israeli withdrawal.

“This is from the war,” says Domaine des Tourelles’s Faouzi Issa, opening a bottle of his superb Marquis des Beys 2006. “It’s funny in Lebanon, we always mention the war.”

When I last visited in May 2008, open warfare erupted between Hezbollah and rival Sunni militias in Beirut and elsewhere – the most dangerous moment since the civil war. The airport was blockaded and I was unable to leave east Beirut or the Christian coastal strip north. I eventually escaped by taxi in a hair-raising ride over the mountains and up the northern Bekaa to Syria.

On the night of Hezbollah’s 2008 victory, Château Musar patriarch Serge Hochar insisted on taking me to dinner, distant automatic fire popping in west Beirut. He reassured me, as I fretted: “Andrew, in Lebanon you have to be patient – just like with wine.”

This time, the signs are more ominous. Since 2011, Lebanon has been flooded with Syrian refugees, officially 1.2 million of them, perhaps nearer 1.5 million in reality, in a country of just four million. Wary of the results of Palestinian refugee camps on its soil, Lebanon has been anxious not to let refugees gather in large camps, as in Turkey and Jordan. The result is that Syrian refugees have settled everywhere.

Some have rented rooms and apartments, forcing up rents. At a UNHCR reception centre in Zahle, I met Warde Ali Sakany, who fled Aleppo this year after her neighborhood was bombed and Free Syrian Army rebels threatened to kill her family: her eldest son is in the Syrian army. She now lives in a single room with her eight other children. Her three-year-old, Ibrahim, has hearing problems following the bombing: their house lost all its windows.

“It’s humiliating,” she said. “I’d prefer to be in my house in Syria eating only bread and onions than be here.” Even less fortunate are the 140,000 refugees in the Bekaa alone, who live in makeshift shelters lining many roads.

The prospect of a longer-term presence worries many Lebanese. Aside from the burden on services, the refugees are 95 per cent Sunni, threatening to upset Lebanon’s delicate confessional balance. And disaffected young refugees are ripe for radicalization by the jihadists now seeking to expand the Syrian war. “This is the next Palestine Liberation Organisation generation in 10 years’ time,” warns Shabb.

Even now, al-Qaeda-aligned Syrian groups such as Jabhat al-Nusra are recruiting in Ain al-Hilweh, Lebanon’s largest Palestinian refugee camp, outside the city of Sidon. Its population of 70,000 has swelled by at least 30,000, leading to fighting. Jihadists from the camp were involved in the three-day stand-off in June staged by extremist Sunni leader Ahmad al-Assir: 16 Lebanese army soldiers were killed. The foetid slum was home to Naim Abbas, a commander in the al Qaeda-affiliated Abdullah Azzam Brigades, arrested early this year.

There has been heavy fighting between Sunnis and pro-Syrian Alawites in Tripoli, with the army in the middle. But Sunni extremists’ ire is directed principally at Hezbollah.

The Shia militia emerged in the mid-1980s to challenge the Israeli occupation of southern Lebanon. Hezbollah has since become the most effective guerrilla force in the world: after the Israelis withdrew in 2000, it refused to disarm. Armed by Iran and Syria, it proved its military prowess when Israel invaded again in 2006, fighting elite Israeli units and tanks to a standstill. Now Hezbollah has perhaps 20,000 fighters, with as many as 5,000 in Syria fighting in support of its patron, Bashar al-Assad. Last June they proved crucial in the regime’s battle to re-take the strategic town of Qusayr, just across the border.

For this, Hezbollah is under attack in Lebanon, with a string of jihadist car bombings since 2013 in its strongholds of south-west Beirut – the Dahiyeh – and the Bekaa. In the latter, it finds itself in direct logistical co-operation with the Lebanese army (another source of grievance for Sunni radicals).

Meanwhile in August, a joint Isis/al-Nusra force attacked Arsal, a small town in the north-east Bekaa, taking Lebanese soldiers hostage. Three have been beheaded; at least 27 are still being held.

Hezbollah is estimated to have lost as many as 1,000 troops. Shia morale will not be helped by pictures like the one I was shown on a smartphone: sent to the mother of a Hezbollah fighter from his mobile, it showed his bloodied head lying on the group’s yellow flag next to his body.

Part of Hezbollah’s response is to burnish its non-sectarian credentials. Last month, leader Hassan Nasrallah told a huge crowd: “I address Sunnis in the region: Shiites are not at war with you. We are both, together, at war with extremist groups like the Islamic State.”

“We have the same goal,” a Hezbollah source told me of the group’s cooperation with the army. “We’re both fighting the takfiris [apostates] who want to kill us and want to transform Lebanon into a khilafa [caliphate], killing Muslims and Christians.”

Hezbollah’s military dominance within Lebanon is one factor that makes a return to civil war unlikely for now, despite the country being awash with weapons (most households own firearms). One Christian businessman told me that he was more worried now than at any time since the end of the civil war, but conceded of Hezbollah: “These guys we can live with. They’re a state-within-a-state but we don’t want them to lose to Isis.”

And there is plenty of normality as well as tension. Indeed, as Château Kefraya’s Emile Majdanali comments: “War is a natural state here.” It’s true: soon you hardly notice the endless army checkpoints, bored Lebanese soldiers cradling their M16s, or the mirrors pushed under your cab to check for bombs at smart Beirut hotels.

More than that, Lebanon still has an irrepressible optimism. In Beirut, the swanky Phoenicia Hotel has been restored next to the shell-pockmarked ghost of the old Holiday Inn. Billboards for new luxury flats near Martyrs’ Square blare “Iconic cosmopolitan hub” opposite the bullet-riddled shell of a cinema and the ruined church of St Vincent de Paul.

And the nation’s winemakers are investing. At Château Ka in the Bekaa, Akram Kassatly, who rebuilt his winery destroyed in the civil war, has now invested millions in a new brewery as well.

At Château Florentine, in the Chouf mountains south-west of Beirut, the Yaghi family have invested large sums in a huge winery overlooking dramatic mountain valleys. In its vast barrel room, Hiba Salloun – one of just two female Lebanese winemakers – proudly showed me her wines.

At IXSIR, up the Mediterranean coast near Batroun, Nissan-Renault CEO and business guru Carlos Ghosn is an investor in a particularly bold venture, making wine from six different high-altitude vineyards of up to 1,800m. The winery has been constructed beneath a 400-year-old stone house: it has won green business awards for its energy- and water-saving design. And the wines are sublime.

IXSIR’s Hady Kahale concedes that the situation is worrying, but is upbeat: “If we’re able to survive and grow in this period, we’ll do really well in the future.”

Can a tolerant Lebanon survive? “Democracy is not just the rule of the majority,” warns a senior source with Amal, the biggest Shia party. “Democracy by simple majority means that Daish [Isis] win.”

Wine is part of that pluralism. “The day that we are not allowed to make wine in Batroun is the day Lebanon is finished as a country,” says Kahale. “That would be the day I get a ticket out.”

At Domaine des Tourelles, I drank a 1976 red, harvested the year after the civil war started. It was fragile but still beautiful, individual. Lebanon and its wines have survived turmoil before. Those who care about the future of Arab democracy must hope they do so once more.

Originally published in The Independent