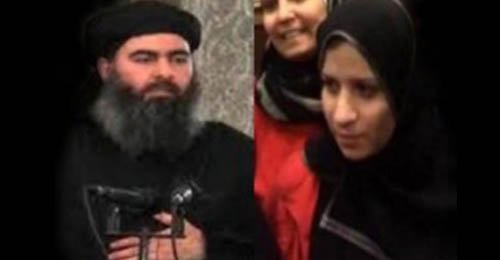 ISIS is asking for the release of Saja al-Dulaimi, the former wife of ISIS leader Abu Bakr al-Baghdadi. (File photo)
Share:
By: VENETIA RAINEY
Beirut, Lebanon – There is no longer any point in saying Lebanon is “on the brink”. The tiny Mediterranean country has been described as such for years, and it has proven itself more than able to soldier on – with help from the international community.

These last few days have shown the importance of foreign assistance in dealing with the numerous problems facing the country caused by the civil war in neighbouring Syria.

The highly significant capture of Saja Dulaimi, believed to be the second (but not last) wife of Islamic State leader Abu Bakr al-Baghdadi, was apparently made possible in part by Western intelligence.

Having reportedly been estranged from Baghdadi for over a year, she is unlikely to be able to provide anything militarily useful – but she has other uses.

Her detention, and that of the couple’s daughter, is a symbolic victory over a man whose fearsome reputation relies on remaining as mysterious as possible.

It is also an excellent bargaining chip for the Lebanese government to employ in the long-stalled negotiations to release around 26 Lebanese security personnel kidnapped by IS and Nusra Front forces during the battle of Arsal in August.

The two groups have already beheaded three of their captives, and the fate of the survivors remains a touchpaper for unrest in Lebanon, with protests regularly leading to major roads being blocked.

Foreign assistance also plays a part in the story of Ras Baalbek, a predominantly Greek Catholic town on Lebanon’s northeastern border with Syria.

A bombastic report in the Telegraph told how “a clandestine British squad” worked at great speed to build a series of watchtowers along the border to save the citizens of Ras Baalbek from certain massacre by IS forces intent on “storming west to the Mediterranean”.

The 12 towers, simple structures made of shipping containers and wire cages filled with rubble, certainly constitute a huge stride toward securing a previously porous and barely marked mountainous frontier.

But what the Telegraph failed to mention was that Ras Baalbek residents were already prepared for the worst; locals set up armed patrols months ago to make sure they were not caught unawares.

That’s not to say that the watchtowers don’t make an enormous difference to the security of the town, but the Lebanese are not people to sit back and wait for IS to come knocking.

Foreign assistance – in the shape of funding and training – has also played a key role in the upgrading of the Lebanese Army.

The US and Britain have supplied, among other things, much-needed armed helicopters to supplement the country’s tiny air force. Also, the Saudis have given a $3 billion grant for French military goodies, and there’s an offer of aid from Iran – not yet accepted.

The need for this assistance was highlighted during the five-day battle of Arsal in August, and again just this week.

On Tuesday, a patrol of seven Lebanese soldiers was ambushed on the border with Syria – it is still unclear by whom, but both Nusra Front and IS militants are holed up in the area – leaving six dead and one seriously injured.

The Lebanese Army still has a long way to go before it is as well equipped to deal with the ongoing threat of border incursions as it would like – there are rumours that the military doesn’t even have enough night-vision goggles to go around – but every little helps.

Of equal importance is the outpouring of support that the army is receiving from the general public and the Lebanese media. The country may not be able to train or equip its military to the same extent as Britain or the US, but as any general will tell you, morale is just as important as guns when dealing with an existential threat.

Of course, helping with security issues is sexy; world leaders get to say that they have saved towns from IS massacres.

What is less sexy is continuing to feed the insatiable beast that is the humanitarian system, working to keep more than 1.1 million Syrian refugees in the country afloat.

The Lebanese have done more than their fair share in dealing with the regional refugee crisis, but the international community is clearly starting to lose interest. After more than three years of doom and gloom, donor fatigue has well and truly set in, and it’s beginning to show.

One example: the World Food Programme announced this week that it is so short of funds that it has been forced to stop providing food vouchers to 1.7 million Syrian refugees sheltering in Jordan, Iraq, Turkey and Egypt as well as Lebanon.

“Without WFP vouchers, many families will go hungry,” said a spokesman for WFP, which needs $64 million just to continue its work on the Syrian crisis through December. (Readers can donate here.)

Not only is this obviously devastating for those displaced by the Syrian civil war, it also threatens to introduce another element of instability into already struggling host countries: hungry people make for desperate people, people who are easy prey for extremist groups looking for recruits.

And of the 1.7 million Syrian refugees losing their vouchers with immediate effect, some 900,000 live here in Lebanon. ·