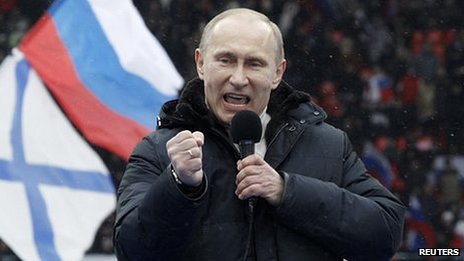 Russian President Vladimir Putin is being pushed “further into a corner” by falling oil prices, leaving him little option but to continue his aggression toward Ukraine and confrontation with the West, Eurasia Group President Ian Bremmer told CNBC on Tuesday.

Putin has “gone all-in on an anti-U.S., must-keep-Ukraine nationalist engagement,” Bremmer said on “Squawk Box.” He said it’s “completely inconceivable” for Putin to back down.

“This is what is behind all his approval ratings. It’s behind who he now is as a leader,” Bremmer said, adding that capitulation would “erode a lot of his power.”

Russia’s currency and economy are crumbling along with oil prices, the country’s main export and revenue source. On Monday, the ruble suffered its worst one-day decline since 1998, and it looks like Russia’s economy will tip into recession next year.

“I think that lower oil prices simply squeeze him harder, pushes him further into a corner. He feels he has to fight as a consequence,” said Bremmer, whose Eurasia conducts research and advises clients on political risks around the world.

Because of Putin’s aggression in Ukraine, Russia has been forced to scrap a pipeline to supply natural gas to Europe. The $40 billion South Stream project had proposed to enter the EU via Bulgaria. He said Monday the pipeline instead would be diverted to Turkey.

Meanwhile, Bremmer predicted the real problems for Putin and Russia are still a couple years off. “When Putin really takes economic pain that has the potential to destabilize the country, I’m thinking about 2017, in the runup to the 2018 election.”

But he said he doesn’t see oil prices staying quite this low over time because of the conflict gripping Libya three years after the overthrow of Moammar Gadhafi and the possibility of sanctions against Iran.