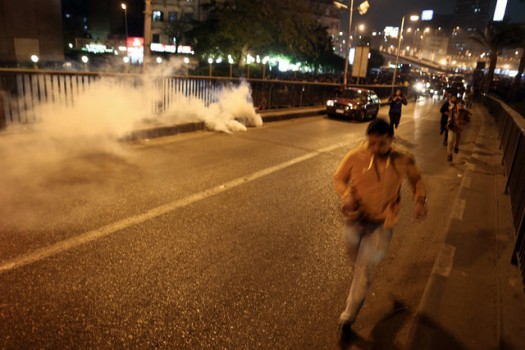 Egyptian anti-Mubarak protesters run for cover from smoke-grenades fired by the police during clashes in Tahrir Square in Cairo yesterday. The protest was largely quashed by police in confrontations that killed two people and wounded nine, some critically, according to the Health Ministry. Photographer: Mohamed El-Shahed/AFP via Getty Images
Share:
Small clashes broke out between security forces and protesters on two Egyptian college campuses as a court cleared President Hosni Mubarak of complicity in the deaths of civilians during the 2011 uprising that toppled him.

Yesterday’s dismissal of charges, after Mubarak’s initial conviction and life sentence were overturned in January 2013, sparked an anti-government rally of about 2,000 people in Tahrir Square, the center of the revolt against Mubarak, 86. The protest was largely quashed by police in confrontations that killed two and wounded nine, some critically, according to the Health Ministry. The protests renewed today, with demonstrations on campuses in Sharqiya and Alexandria provinces, authorities said, as well as near Al-Azhar’s Nasr City campus in Cairo.

Critics contend that the election of President Abdel-Fattah El-Sisi has allowed the reincarnation of Mubarak’s police state and crushed hopes of justice for the families of those killed in the uprising.

“Since 2011, the official state narrative viewed Jan. 25 as a revolution, which was against Mubarak and the system over which he presided,” H.A. Hellyer, non-resident fellow at the Center for Middle East Policy of the Brookings Institution in Washington, said by phone yesterday. “With this verdict, it becomes even harder for that narrative to hold.”

Mubarak’s ouster was a key milestone in the 2011 Arab Spring revolts that began in Tunisia and spread to Bahrain, Yemen, Syria and Libya, triggering years of violence. The decision to drop charges against him can be appealed, Yasser Sayed Ahmed, attorney for the families of protesters killed during the uprising, said by phone.

Activists and opposition figures had seen Mubarak’s trial as an opportunity for justice to take root in Egypt after years of official corruption. The acquittals, whether outright or through technicalities as in Mubarak’s case, feed into the perception that little has changed in the four years since his removal, said Wael Eskandar, who took part in the 2011 uprising.

“The verdict will be the grand finale of a long process of injustice, and evidence that the current regime is just an extension of Mubarak’s,” Eskandar said from Cairo. “It’s not a verdict that would move the street now, given the general mood of hopelessness and the crackdown on opposition. But it’s significant because it’s very symbolic of where we are right now.”

Much of the talk about the re-emergence of a police state follows the crackdown on Islamists and other government opponents after the July 2013 overthrow of Mubarak’s elected successor, Mohamed Mursi, led by then-defense chief El-Sisi.

The thin turnout in Tahrir reflected both the El-Sisi government’s intolerance for dissent and comes as many Egyptians feel a sense of frustration after years of post-Mubarak turmoil. At the height of the 2011 uprising, hundreds of thousands massed in the square, calling for Mubarak’s removal. It later served as a rallying point for calls to topple Mursi. Since Mursi was ousted, protests there or elsewhere in the capital have been limited, and quickly quelled by security forces.

Advocacy groups, including Human Rights Watch, contend El-Sisi’s government is curbing freedoms under the pretext of combatting terrorist groups, after branding Mursi’s Muslim Brotherhood one. Security forces have killed hundreds of Brotherhood members and supporters since he was overthrown, and arrested and charged thousands more. They have also opened an offensive in the restive Sinai peninsula after militant attacks against troops there.

Mubarak may not be freed immediately because he’s serving a three-year sentence imposed in May after he was convicted of embezzling public funds.

The presiding judge yesterday, Mahmoud El-Rashidy, also found the former president not guilty in a corruption case linked to the sale of natural gas to Israel. He also acquitted former Interior Minister Habib El-Adli in the deaths of the protesters in 2011.

On trial with Mubarak were his two sons, Alaa and Gamal, as well as six of El-Adli’s top aides and businessman Hussein Salem, who was tried in absentia. All were acquitted of the various criminal charges against them.

The corruption-related acquittals troubled advocacy groups such as Transparency International, which called them a “serious setback in the effort to fight graft and the abuse of power in the Middle East’s most populous country.”

“This is a reversal of one of the most important outcomes of the Arab Spring: leaders being held to account for betraying the trust of their citizens,” Jose Ugaz, Transparency’s chairman, said in an e-mailed statement. The verdicts send “a message that leaders can get away with decades of running a country while coffers are stripped bare.”