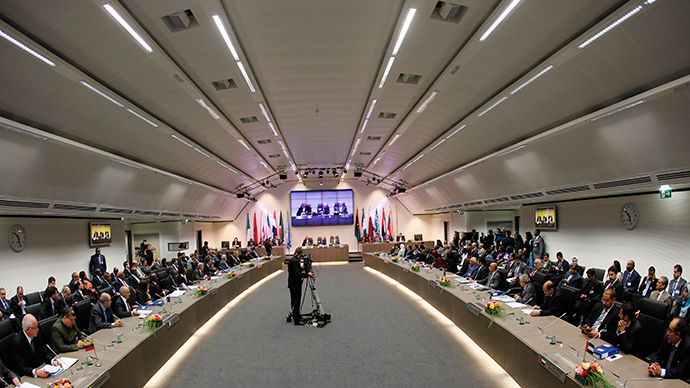 Saudi Arabia’s oil minister Ali Al-Naimi delivered the news as he left a meeting of the cartel in Vienna.

Energy ministers from the Organization of the Petroleum Exporting Countries, led by Saudi Arabia, are in Austria against the backdrop of oil prices that are at their their lowest levels in four years. That drop is partly a result of output that is running ahead of demand. It is also being driven by a boom in shale production in the United States.

Prices have fallen 30% since OPEC last met in June. OPEC countries account for 40% of global oil production. The group has a production target of 30 million barrels a day that has been exceeded by 600,000 barrels a day for the past six months.

Ahead of the meeting, , Saudi Arabia’s oil minister, said he expected oil markets to “stabilize,” thus lowering expectations that a reduction in supply would take place. However, some of OPEC’s poorer members, such as Venezuela and Nigeria, are thought to be pushing for a cut because they need a higher oil prices to sustain their economies.

“The fair price for all OPEC members is different,” Iranian oil minister Bijan Namdar Zangeneh told journalists at the conference on Thursday. “We hope that OPEC will arrive at a price that is acceptable for all OPEC countries to allow them to continue producing and to help support their economies.”

Due to ongoing economic sanctions over its nuclear program, Iran’s ability to sell its oil on world markets is restricted.

Opening the one-day summit, Abdourhman Ataher Al-Ahirish, Libya’s vice prime minister for corporations, said: “It is important to recognize that if the recent price trend continues, the long-term sustainability of capacity expansion plans and investment projects may be put at risk.”

He said that global oil demand would grow by around 1.1 millions barrels a day in 2015 to hit 92.3 million barrels a day.