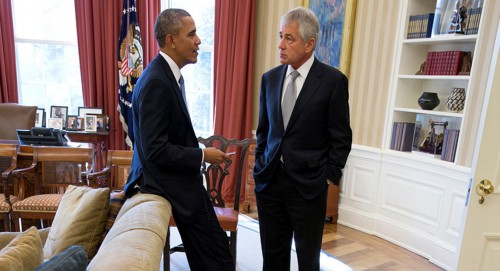 When President Obama first summoned Chuck Hagel to the Oval Office in October, he wanted to know how his Pentagon chief planned to cope with the dangerous new threat posed by the Islamic State that had drawn the reluctant president back into war in the Middle East, not to mention getting a sense of Hagel’s other plans for the final two years of Obama’s presidency.

But after several lackluster, low-energy sessions, Obama was so unimpressed by the performance of his laconic, self-effacing defense secretary that he decided Hagel “just wasn’t the man for the job,” according to a senior administration official. That set in motion the decision that led to Hagel’s decorous dumping on Monday by a president who almost never fires anybody—and never admits it when he does.

Hagel, a heavy-lidded former Republican senator from Nebraska with an iconoclastic streak, freely acknowledged his own shortcomings in at least three meetings with Obama. He had signed on to preside over the end of Obama’s wars, a period the president envisioned as a time of downshifting and pulling back for the over-stressed American military. But that was then, after the 2012 election; now, Hagel reckoned, he wasn’t the kind of gung-ho, wartime consigliore Obama needed as he recalibrates his national security strategy to deal with a new round of conflict in the Middle East.

But Hagel also fired back: After reports began surfacing of White House dissatisfaction with his performance in the past few months—including an ominous column by Washington Post columnist David Ignatius—he dashed off an uncharacteristically sharp memo to National Security Adviser Susan Rice slamming the administration’s Syria policy as rudderless and ill-defined.

“I don’t think he knew when the axe would fall, but he knew it was time,” said a person close to Hagel. “He also knows that it isn’t really about him. … It’s hard to find a rationale for getting rid of Hagel that was entirely about Hagel. It has as much to do with the internal politics of the White House, and the larger policy issues, as it has to do with him.”

Even before the midterm election defeat earlier this month that saw Republicans take both houses of Congress while hammering a message of Obama administration fecklessness and indecision on national security, it was no secret that Obama and his West Wing team harbored serious reservations about the decorated Vietnam vet whose near-narcoleptic performance during confirmation hearings in early 2013 prompted an immediate bout of buyer’s remorse. In a Politico Magazine profile of Hagel a year ago, one senior Obama aide called the defense secretary a “paper tiger” and suggested “he needs to show us more” to keep his job, hardly a guarantee of long-term employment. More recently, White House chief of staff Denis McDonough has groused about Hagel’s inability to control the Pentagon brass that ostensibly works for him—believing the Pentagon had been the source of calculated leaks over expanding the war in Iraq and Syria intended to narrow Obama’s policy options.

At the same time, several sources I spoke with yesterday insisted that Hagel’s dismissal should not be misinterpreted as the start of a major national security overhaul that many, especially Republicans, have called for. “There is no shake-up,” a senior administration official told me. “For good or ill, Hagel’s it.”

“What’s sad about this whole thing is that this is a way to say to the American electorate that we are shaking things up. But this is not a shake-up because Hagel never really had a voice in policy discussions anyway,” added one former defense official. “This is so superficial.”

The defense secretary, regardless of his lofty title, was never part of the president’s inner decision-making circle on foreign policy, which the sources said would remain intact (and it’s worth noting, the sources said, that powerful Joint Chiefs Chairman Martin Dempsey is), and few expect his departure to solve the deeper problems plaguing Obama’s national security team given the iron grip exerted on foreign policymaking by Obama’s West Wing staff.

And the move alone will do little to help a struggling second-term president mend what the sources said were far deeper rifts within his overburdened West Wing-based national security team, pointing in particular to long-simmering tensions between McDonough, who had been deputy national security adviser before moving up to chief of staff, and Rice, the worst-kept secret struggle in Washington.

More broadly, the dumping of Hagel leaves unanswered the key foreign policy dilemma that hangs over the remainder of Obama’s presidency: It’s clear that Obama, propelled to office six years ago on the promise of ending two unpopular wars, must now radically readjust his priorities from a posture of military withdrawal and Pentagon budget cuts to one of engagement, but it’s not at all clear how he plans to do so.