Japan’s City of the future sinks into the ocean 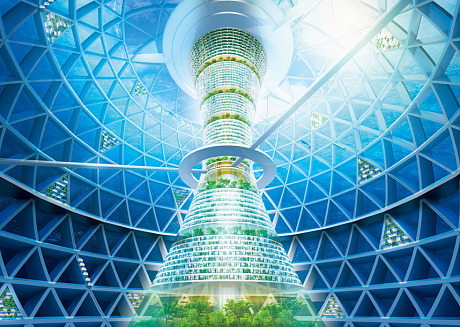 An artist impression of the modern-day Atlantis (Shimizu Corp)
Share:
By Julian Ryall, With dry land increasingly at a premium, a Japanese construction company has come up with a plan to sink a spiraling city into the depths of our oceans.

Each Ocean Spiral will be home to about 5,000 people, according to Shimizu Corp., with each structure also incorporating business and office facilities, hotel and entertainment facilities.

A blueprint for the city of the future was unveiled in Tokyo this week, with Shimizu confidently predicting that the first of its underwater cities would be ready for residents to move in as early as 2030.

At the surface, the city will have a vast floating dome that could be made watertight and retracted beneath the surface in bad weather.

Beneath the dome, the spiral structure would descend as much as 9 miles to the seabed, where an “earth factory” would produce methane from carbon dioxide by using micro-organisms, the company said.

The seabed could also be mined for rare earth minerals and metals.

Generators would create power by taking advantage of the difference in the temperature of sea water at varying depths, while undersea docking facilities would enable supplies to be delivered and research to be conducted.

Shimizu plans to build the Ocean Spiral from resin instead of concrete and to use industrial-scale three-dimensional printers to create the components.

The cost of developing the first undersea city has been estimated at 3 trillion yen ($25.5 billion), although the company says that subsequent versions will be significantly cheaper.

Shimizu has been working on the project with the Japan Agency for Marine-Earth Science and Technology and Tokyo University and believes it will take five years to build the first unit.

Shimizu has a reputation for blue-sky thinking in a country in which construction firms are traditionally conservative in their approaches to projects.

Previously, Shimizu has proposed creating a 250-mile wide “belt” of solar panels around the Moon that would gather and relay a constant supply of energy to “receiving stations” on Earth by way of lasers or microwave transmission.

Another plan is to build vast floating islands for the shrinking atoll nations of the Pacific, such as Kiribati.