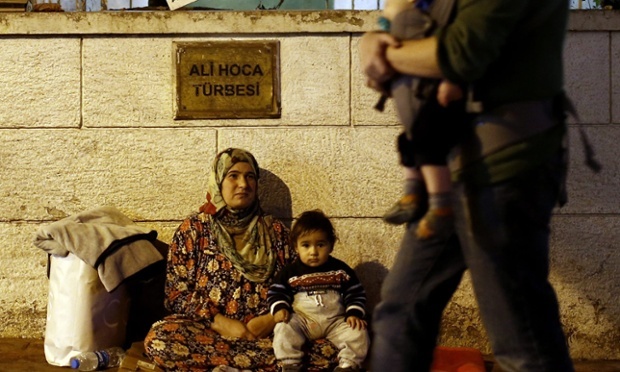 More than 1 million Syrian refugees who have flocked to Turkey to escape fighting at home are struggling to survive on their own, with government-run refugee camps operating at full capacity, according to a report by Amnesty International.

Turkey has been lauded for its swift response to the massive influx of Syrians, but the international community has failed to find sustainable ways to assist, the report says.

Turkey hosts 1.6 million Syrian refugees, half of the total that have left Syria since the war began in March 2011. So far, the Turkish government has spent about $4bn (£3bn) on the refugees, and theoretically grants free healthcare to all Syrian refugees.

About 220,000 are living in 22 government-run camps, which offer food and essential services, the report said. The remaining 1.38 million – more than 85% – are living outside the camps, mostly in communities along the Turkey-Syrian border.

In many cities and towns bordering Syria, tension is rising due to an ever-increasing Syrian population. Turkey does not grant Syrians official refugee status, labelling them as “guests” who enjoy temporary protection, but in many Turkish cities with a large Syrian population, local people increasingly feel that refugees have outstayed their welcome, often citing lack of housing, rapidly rising rents and unregistered Syrian businesses that make for unwelcome – and sometimes untaxed – competition.

The Amnesty report states that an increasing number of refugees are being denied access to the safety of Turkish territory, and many of those who attempt to cross the border have become victims of abuse.

“There can be no excuse for ‘pushbacks’ into war-torn Syria or for beating or shooting at refugees seeking safety in the country,” Andrew Gardner, Turkey researcher for Amnesty International, said.

“The response of the international community to the Syrian refugee crisis has been pitiful both in terms of resettling refugees from the region and taking financial responsibility for the reception of Syrian refugees in Turkey,” he said.

According to the report, only 28% of the $497m earmarked for Turkey in the UN’s 2014 regional funding appeal for Syrians has been committed by international donors. “In September 2014, Turkey received some 130,000 refugees from Syria, more than the entire European Union had in the past three years,” the report states.

Amnesty pointed out that the rising tension in Turkey and the unwillingness to accept more Syrian refugees resulting in violence at the border was in part due to the lack of a concerted international effort to find a more sustainable solution to the crisis.

The report documents dozens of cases of Syrians who were severely beaten, shot at and otherwise ill-treated by Turkish border guards. At least 17 refugees were killed. In violation of the non-refoulement principle, which bans countries from returning refugees to conflict zones where their lives are in danger, many Syrians are being pushed back at the Turkish border.

The report points out that the estimated 1.38 million Syrians who live outside the government-run refugee camps struggle to secure a minimum of social and economic rights, such as education, housing and healthcare. Many families live in abject poverty, often in unsanitary, even dangerous, housing conditions. According to the Turkish Disaster and Emergency Management Presidency (AFAD), only 15% of refugees outside of camps receive humanitarian aid.

In order to circumvent legal restrictions on opening businesses, shops, cafes and restaurants are often owned by Turks on paper, but managed and operated by Syrians.

Reyhanli, a small town close to the Syrian border, is dotted with shops and restaurants sporting Arabic signs. One corner shop owner, 38, said that he felt overwhelmed by the new competition. “I have to pay taxes and they don’t. I have to keep everything in order in case of a labour inspection, but nobody asks anything of the Syrians. The authorities simply turn a blind eye,” he said.

Another disgruntled resident said his landlord recently increased his rent from 300 lira to 700 lira (£85-£200) a month, arguing that many were willing to pay. “I now feel like a stranger in my own city,” the chef said.

“There are no more apartments, no more houses,” agreed Mustafa, 23. “I am going to get married next month, but my wife and I will have nowhere to move to.”

In some cities rents have tripled or quadrupled in the space of three years due to the massive increase in demand. Even those who can afford to pay inflated rents often struggle to find homes.

Discontent and tension are on the rise. According to a poll in January, only 11% of all Turks support the government accepting Syrian refugees unconditionally, whereas 65% thought Turkey should stop welcoming them altogether, with 30% wanting to send back those already in the country.

While Amnesty called on Turkey to end abuses of refugees on its borders, the report also made clear that a more sustained international effort to alleviate the suffering of Syrians fleeing the war was indispensable.

“For over three years the international community has looked the other way. But it is clear that this crisis will not go away and it is likely that it will get worse,” Gardner said.

“What is needed is a comprehensive solution for the more than 1.3 million refugees who live in Turkey outside the camps, many of them in appalling, inhumane conditions.

“The international community must supply the extra funding to meet their needs, which should include investing in infrastructure, schools and healthcare. This would be to the benefit not only to the refugees, but also of the local population, and hereby provide a comprehensive solution to the crisis,” he said

Syrians in Turkey: ‘people are fed up with us being here’

Abu Nour, 35, from Aleppo, said he was severely beaten by Turkish soldiers when he tried to cross the border near Gaziantep. “There were several of them, and they hit and kicked me. I had to turn back,” he said.

The former primary school teacher, who eventually made it into Turkey, has lived in Gaziantep for less than a year and says he is “very grateful” for everything Turks have done for him.

“But I feel that people are fed up with us being here,” he added. “They react angrily. I am not comfortable here and if I could I would go somewhere else.”

Married only by a religious official in his home country for security reasons, he has been unable to register his Syrian wife and newborn child as his family, banning them from receiving further aid and family benefits. “We feel trapped,” he said.

While many Syrians say they want to go home after the war is over, many have started to plan a more permanent stay in Turkey and it is likely that many will remain in Turkey for a long time after the conflict comes to an end.

Selahaddin Jemili, 50, from Manbij, recently opened four small shops in Gaziantep selling towels of all sizes, a business he used to conduct successfully in Syria. He still runs four stores in his home town across the border, but fears the volatile situation there could leave him destitute: “My shops in Turkey are like insurance for me. In Syria, I could lose everything in one minute, one bomb might finish everything I have built there.”

The Gaziantep Chamber of Commerce has urged the Turkish authorities to regularise Syrian workers, arguing that all sides would benefit. “In fact, Gaziantep needs more workers. We asked the government to issue temporary work permits for Syrians so that they are able to contribute to our economy,” Eyüp Bartik, president of the chamber, said.

In October the Turkish government passed a temporary protection directive that, in theory, will grant Syrian refugees a firmer legal status in their host country, including the guarantee to stay in Turkey and the possibility to apply for work permits. It has not yet been implemented.

The lack of clear regulations, as well as the inability of Syrians who cross the border illegally to apply for a business licence or work permit, often leaves them without funds and vulnerable to exploitation. With his papers in order and the capital necessary to found a business in Turkey, Jemili was able to legally open his shops, but most Syrians are less fortunate.

Abu Muhammad, 58, a master pastry chef from the Syrian city of Hama, works in a Reyhanli bakery owned by a Turk, for 600 lira a month. “A Turkish master baker would make much more than that, it’s not fair,” he said. “But I am very grateful to the Turks who opened this shop, I will not complain.” Since he does not have a work permit, his employer does not pay his social security.

One Turkish worker in a furniture factory in Gaziantep said her employers would regularly hide illegally employed Syrians during visits from labour inspectors. “They get paid even less then we do,” she said. “They are desperate.”