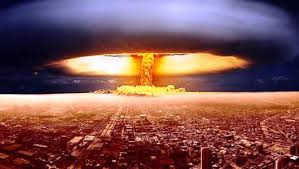 I never had much time for the Greenham Common women. As a mildly reactionary student of the 1980s, I regarded them – and their protest camp outside a British nuclear-weapons base – as silly and misguided. After all, decades of experience taught that nuclear deterrence worked.

ThirtIy years on and the nuclear peace is still holding. But I am becoming a little less secure in my belief that nukes will never be used.

There are three reasons for my anxiety. First, the spread of nuclear weapons to unstable countries such as Pakistan and North Korea. Second, the growing body of evidence about how close the world has come, at various times, to nuclear conflict. My third reason for worry is more immediate: a significant increase in threatening nuclear talk from Russia.

Both in private and in public, the Russians are now making increasingly explicit references to their country’s nuclear arsenal. A couple of weeks ago, I witnessed a prominent Russian warn an audience, at a private seminar in Washington, that “President [Vladimir] Putin has put the nuclear gun on the table.” The Russian president has indeed told an audience at home that outsiders should not “mess with us”, because “Russia is one of the leading nuclear powers”.

Last week, Pravda – the Soviet mouthpiece during the cold war – ran an article headlined, “Russia Prepares Nuclear Surprise for Nato”. It crowed that Russia has parity with the US in strategic nuclear weapons and boasted: “As for tactical nuclear weapons, the superiority of modern-day Russia over Nato is even stronger. The Americans are well aware of this. They were convinced before that Russia would never rise again. Now it is too late.”

My only hesitation in writing about this is that I have little doubt that one aim of all this nuclear posturing from Moscow is precisely to get western commentators talking about a Russian nuclear threat. Russia is desperate to stop the west supplying military aid to Ukraine. So, they want to get across the message that any such escalation would provoke a ferocious reaction from Moscow and – who knows – perhaps even the use of nuclear weapons.

Mr Putin seems to adhere to what Richard Nixon called the “madman theory” of leadership. The former US president explained: “If the adversary feels that you are unpredictable, even rash, he will be deterred from pressing you too far. The odds that he will fold increase greatly.” President Putin may be right in calculating that, by putting the nuclear gun on the table, he can always out-madman Barack Obama, the coolly rational US president.

Nonetheless, even assuming that the Russian nuclear talk is a bluff, it is still dangerous – since to make the bluff intimidating, the Russians have to raise tensions and take risks. Last week, General Philip Breedlove, commander of Nato forces in Europe, said that Russia had “moved forces that are capable of being nuclear” into Crimea. As fighting in Ukraine continues, the danger of Russia and Nato misreading each other’s intentions increases.

Historians of the cold war have shown that mistakes and miscalculation have brought the world closer to accidental nuclear warfare more often than is commonly realised. A recent report by Britain’s Royal Institute of International Affairs, entitled, “Too Close for Comfort” documents several incidents. Some involved computer malfunctions that led either the US or the USSR to believe that they were under nuclear attack. As the report notes: “Individual decision making, often in disobedience of protocol and political guidance, has on several occasions saved the day.”

Several of the most dangerous near-misses took place during periods of heightened political tension between Moscow and Washington. The most famous such incident was the Cuban Missile crisis of 1962. A more recent instance – with a stronger contemporary resonance – was the Able Archer incident of November 1983.

In September of that year, the Soviet Union had shot down a Korean Air civilian airliner, killing 267 people. That tragedy, like the shooting down of a Malaysia Airways flight over Ukraine this year, had significantly raised east-west tensions with the Russians, then as now, accusing America of militarism and plans for world domination.

Against this background, Nato staged a military exercise that acted out a western nuclear strike on the USSR. Operation Able Archer was so thorough and so realistic that many in Moscow interpreted it as preparation for a Nato first-strike. In response, the Russians readied their own nuclear weapons. It appears that intelligence services alerted the west to how Able Archer was being seen in Moscow, allowing for de-escalation.

One lesson of that episode is that the existence of a “hotline” between Moscow and Washington is no guarantee that the two sides will not blunder. Another is that any ambiguous moves, involving nuclear weapons, can cause a dangerous panic.

My parents’ generation got grimly used to living in the shadow of the bomb. But for my generation, the very idea of nuclear warfare seems like something from science-fiction or even dark comedy, such as Dr Strangelove. But the world’s nuclear arsenals were not abolished after the cold war. Sadly, we may now be returning to an era in which the threat of nuclear warfare can no longer be treated as the stuff of science fiction.