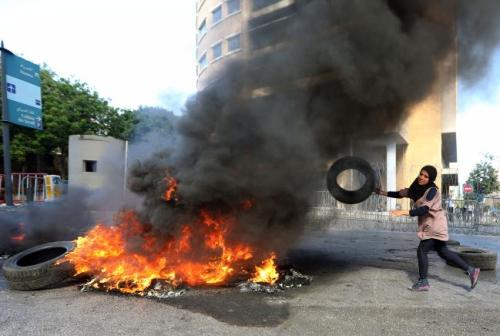 Beirut, Lebanon- “Some calls were made, and the threat has been delayed,” Health Minister Wael Abu Faour told reporters after he visited families of captive servicemen who were protesting near Beirut’s Saifi neighborhood.

The protesters re-opened the roads across Lebanon after receiving assurances that ISIS will not behead the seven hostages it threatened to kill Monday.

Abu Faour said both the families and Lebanon’s negotiators were contacted with news of the delay.

ISIS had given 4 p.m. as ultimatum for the Lebanese government to revoke death sentences handed down to Islamists in Roumieh Prison, threatening to execute seven captives.

According the Mashnouk, the families are being manipulated by the kidnappers, but the interior minister said that “they cannot be blamed for their actions.”

Politicians, however, cannot reduce the sentences of Islamists detained in Roumieh since that authority belongs to the judiciary, Mashnouk said.

Justice Minister Ashraf Rifi pointed out that the five convicts were originally sentenced to death, but their sentences were reduced to life in prison with hard labor.

“It was for your sake, the captives’ families, that the judiciary alleviated the sentences from death to life imprisonment,” MP Hadi Hobeish told the protesters Monday, when he visited their protest site with a group of lawmakers.

Among those sentenced were al Qaeda linked Fatah al Islam militants who fought battles with the Lebanese army in 2007 in the Nahr al-Barid Palestinian refugee camp in northern Lebanon.

Also sentenced were Saudi nationals arrested in a raid on a Beirut hotel earlier this year and accused of involvement with Islamic State.

Frightened by the possibility that they would see their loved ones murdered in a few hours, some of the families left with the lawmakers to the Grand Serail in hope of meeting Prime Minister Tammam Salam, while many others seemed to have given up on the efforts of the authorities, and decided instead to block the Charles Helou highway.

“If have to watch the videos of the beheadings, let’s at least watch them from the middle of the road to tell the world that we do not have a government,” shouted an angry young man among the protesters who was first to head to the highway.

A total of 24 soldiers and police are being held by Islamic State and by Syrian al-Qaeda affiliate the al-Nusra Front after being taken captive in clashes in August in the border town of Arsal.

Three captive soldiers have already been killed by the captives