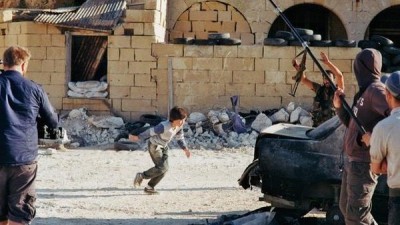 A video that went viral this week, believed to have been shot in Syria, of a boy caught in the line of fire who then pretended to be dead only to spur back up to rescue a girl, turned out to be fake.

Lard Kleberg, the short clip’s director, told the BBC that he had shot the film in Malta this summer.

“If I could make a film and pretend it was real, people would share it and react with hope,” he said.

“We shot it in Malta in May this year on a set that was used for other famous movies like Troy and Gladiator,” Klevberg said, adding that he deliberately presented the film as reality in hope of stirring debate on children in conflict zones.

The men heard in the background were Syrian refugees living in Malta while the boy and girl were professional actors native to the island state.

“By publishing a clip that could appear to be authentic we hoped to take advantage of a tool that’s often used in war; make a video that claims to be real. We wanted to see if the film would get attention and spur debate, first and foremost about children and war. We also wanted to see how the media would respond to such a video,” he told BBC Trending.

The film even received funding from the Norwegian Film Institute (NFI) and the Audio and Visual Fund from Arts Council Norway in October, two institutions Klevberg claims were aware of his intention to not clearly state whether the film is real or not.

“The children surviving gunshots was supposed to send small clues that it was not real,” producer John Einar Hagen said.